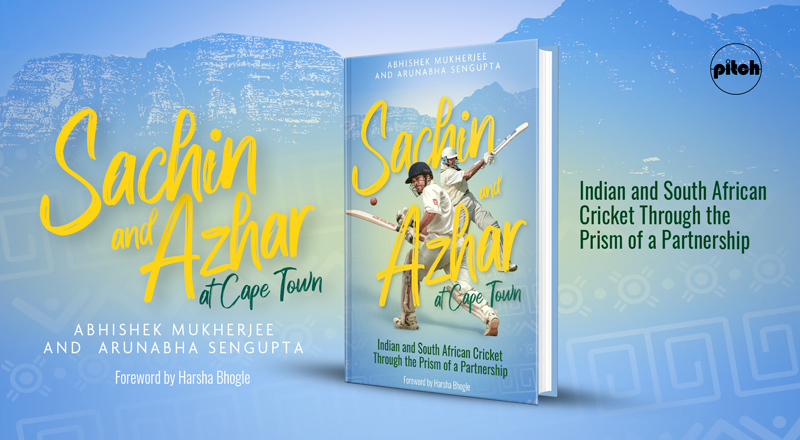 In the latest of Pitch Publishing's virtual cricket talks Abhishek Mukherjee and Arunabha Sengupta joined BBC cricket reporter and commentator Mark Church to talk about their book Sachin and Azhar at Cape Town.

Sachin and Azhar at Cape Town is the story of an incredible partnership between Tendulkar and Azharuddin in the Newlands Test of 1997.

Replying to 529, India slumped to 58/5 against Donald, Pollock, McMillan and Klusener. What followed was an exhilarating counter-attack from both ends, seldom seen in Test cricket.

With Nelson Mandela watching on – he met the players during lunch that day – the pair added a magical 222 in 40 overs, treating the lethal bowling attack with disdain.

Arunabha Sengupta and Abhishek Mukherjee relive the partnership, recounting and analysing every stroke, but as they do, they also bring to life the cricket, history and society of the two countries.

Covering a multitude of topics as diverse as apartheid, Mandela and Gandhi, cricket isolation, non-white cricket in South Africa, rebel tours, the television revolution and commercialisation of cricket; with other historical details and analysis of the game supporting the text, this is a fascinating snapshot of cricket at that time through the prism of that impressive sixth-wicket stand.

• Examines a turning point for Indian, South African and world cricket, and the roles of Mandela and Gandhi in the history of the two nations

• Exclusive contributions from Dilip Vengsarkar, Lance Klusener, the late Clive Rice and others

• Foreword by Harsha Bhogle, while both authors are experienced cricket writers with excellent social media following; Arunabha wrote Apartheid: A Point to Cover

Arunabha Sengupta is a cricket historian, analyst and writer for numerous cricket publications. His books include Apartheid: A Point to Cover - a study of South African cricket, and cricket-based historical fiction Sherlock Holmes and the Birth of the Ashes.

Cricket historian, analyst and writer Abhishek Mukherjee was chief editor of Cricket Country and assistant editor of Wisden India Almanack. He has written for many other cricket publications.