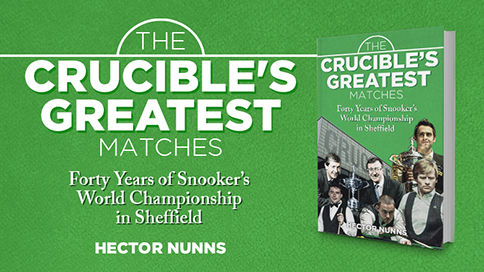 CRUCIBLE BOOK OFF TO A FLYER IN SHEFFIELD

CRUCIBLE BOOK OFF TO A FLYER IN SHEFFIELD

Leading snooker writer Hector Nunns makes his selection of the greatest matches ever played in the famous amphitheatre. With exclusive contributions from the players involved – from the heroes of the early years through to the household names of today – The Crucible’s Greatest Matches celebrates 40 years of snooker at its greatest venue.

The book has met with a tide of positive press during the World Championships in Sheffield. The Sun and the Express have both carried features, World Snooker kindly gave away a prize of the book to their 100k plus followers @WorldSnooker1 – and Hector made a guest appearance on talkSPORT’s Hawsksbee & Jacobs show.

Click here for more information, or to read a sample from The Crucible’s Greatest Matches

A celebration of 40 years of great matches at the iconic Crucible Theatre in Sheffield, home of snooker’s World Championship since 1977 – featuring first-hand accounts from those involved. The Crucible’s Greatest Matches highlights: