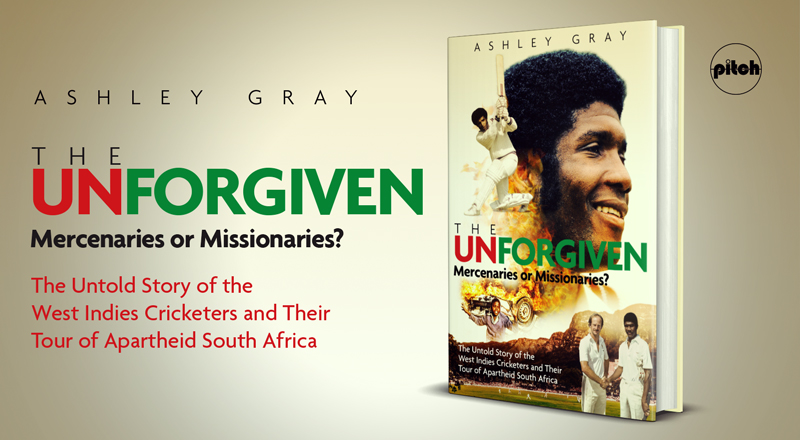 The Cricket Writers’ Club has announced its shortlist of six for the annual Derek Hodgson Cricket Book Award, and Ashley Gray's Unforgiven makes the cut.

He goes back to the early 80s, when 20 West Indian cricketers were paid more than $100,000 each to take part in rebel tours of apartheid South Africa. When they returned home to the Caribbean they were banned for life and shunned by their countrymen.

Some turned to drugs, some to God, while others found themselves begging on the streets. The Unforgiven is their untold story.

In their press release The Cricket Writers' Club explains, 'The list reflects the breadth of writing on cricket with familiar names contesting the prize against first-time authors.

'The judges – Richard Hobson (chair), Tanya Aldred, Murray Hedgcock, Raf Nicholson and Richard Whitehead – were impressed by the tenacity of Gray in tracking down the so-called ‘Rebel’ West Indian players who visited South Africa in the 1980s.'

Hobson said, “This must be the most varied shortlist in the 13 years since the Cricket Writers’ Club established the award. It presents us with a significant challenge in pitting, say, the passion in the writing of Chalke against the style of Hamilton, the thoroughness of Kidambi and originality of Bates. Wigmore and Wilde offer genuine insight into the growth of 20-over cricket while Gray has dealt sensitively with a thought-provoking account of a largely overlooked topic.”

CWC is delighted to reveal the shortlist for the 2020 Derek Hodgson Cricket Book Award.

Congratulations to the authors of six outstanding books – the winner will be announced next month.

Congratulations to Ashley from all at Pitch Publishing, and to Ian Gould, Mark Peel and Colin Shindler whose excellent books all made the long-list.