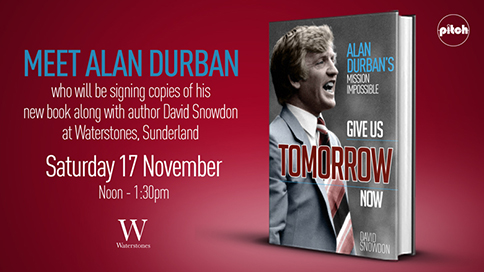 The popular ex-Black Cats boss will be chatting with fans and signing books at Waterstones, Sunderland, this Saturday.

David Snowdon's Give Us Tomorrow Now whirls through a mesmerising 1980s backdrop as a top-flight team strived to satisfy their swarms of faithful and fanatical supporters.

Success or consolidation had proved elusive objectives for a series of Sunderland managers attempting the task of ‘waking the sleeping giant’. In the summer of 1981, a new dawn shimmered as Alan Durban was persuaded to relinquish his comfortable Stoke post and enter the white heat of North East football mania. This disciple of Brian Clough battled to lay enduring foundations and find an on-field blend amidst constant boardroom interference and an intense media spotlight. A restless hierarchy failed to back their manager’s judgement and the lack of a cup run heightened boardroom impatience to boiling point.

The commentary explores Durban’s long-term vision and strategy and how, heartbreakingly, his embryonic ‘tomorrow team’ was not granted the time to mature. This intriguing story reflects an increasingly widespread sporting malaise felt throughout the land. Give Us Tomorrow Now offers an intelligently entertaining and powerful narrative, intensified by the authentic dialogue of the principal characters in this fascinating episode of sport history.

A powerful narrative of a manager striving to satisfy legions of fanatical supporters and an impatient boardroom. In the white heat of North East football mania, Alan Durban battled to achieve long-term stability and an on-field blend despite constant interference.