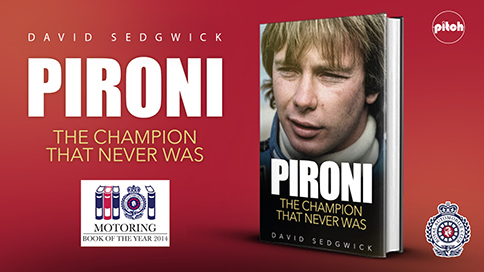 'PIRONI' UP FOR TOP RAC AWARD

'PIRONI' UP FOR TOP RAC AWARD

Congratulations are due to David Sedgwick, as Pironi: The Champion That Never Was is nominated for RAC Book of the Year.

Now in their fifth year, the Royal Automobile Club Motoring Book Awards are recognised as the most prestigious to be bestowed in the automotive publishing industry. The annual awards will take place on Wednesday 31 October at the Club’s historic Pall Mall clubhouse, amongst many distinguished industry guests.

The 2018 shortlist of contenders includes works on racing driver biographies, marque histories and general motoring to legends in engineering and vehicle design.

The six titles shortlisted for Motoring Book of the Year Award are:

Pironi: The Champion that Never Was relates the remarkable story of motor racing’s ‘forgotten man’, ex-Ferrari F1 driver and offshore powerboat racer, Didier Pironi. The book charts an incredible journey which took the young Parisian to the heights of triumph and the depths of despair.

Read Pironi and you will discover:

Click here for more information, or to read a sample from Pironi: The Champion that Never Was