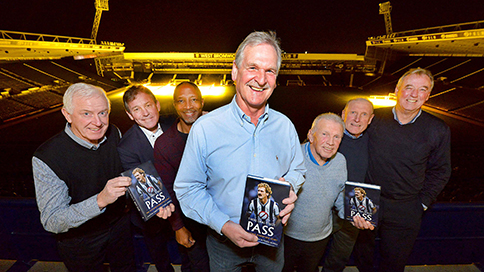 All three Baggies heroes will be talking about their unforgettable times with the club, and signing copies of Thou Shalt Not Pass.

A legend at West Bromwich Albion and an icon Wolverhampton Wanderers, Alistair Robertson is a rare footballer who can walk tall either side of a bitter Black Country divide. The tough-tackling Scot spent 18 years at Albion, gaining promotion under Johnny Giles and becoming a rock during the club's heyday from the mid-1970s alongside skipper John Wile.

Robertson experienced early struggles under Don Howe and other managers earned his ire, including his nemesis Ron Saunders who forced him out of the club in tears. To rub salt into the wounds, he would miss out on a prized Scotland cap. Robertson recovered to lead an ailing Wolves to two divisional titles and a Wembley victory. But beyond the on-pitch aggression and dressing-room camaraderie, Robertson now reveals a calmer, more reflective side to his character.

The highs and lows of Alistair Robertson’s football career, which spanned two decades and the Black Country divide. Read Thou Shalt Not Pass and you will discover:

Click here for more information, or to read a sample from Thou Shall Not Pass.