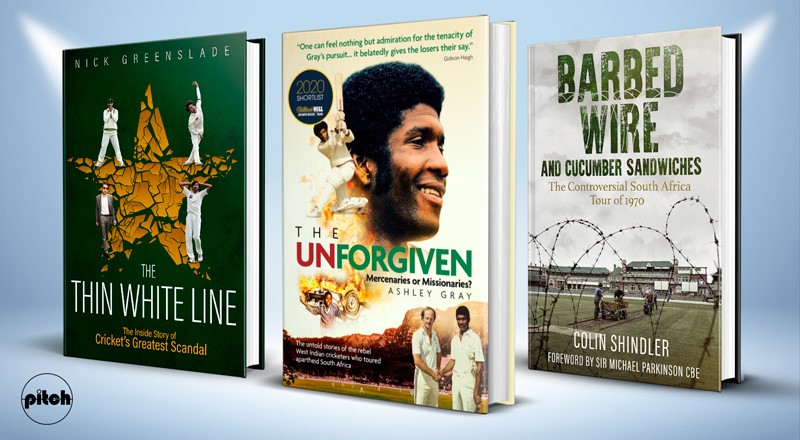 THREE TITLES ON CRICKET BOOK OF THE YEAR SHORTLIST

THREE TITLES ON CRICKET BOOK OF THE YEAR SHORTLIST

We’re delighted to announce that three of our titles have been shortlisted for the prestigious Cricket Society and MCC Book of the Year Award 2021.

The Unforgiven, The Thin White Line and Barbed Wire and Cucumber Sandwiches all made the final cut of just six titles despite strong competition from several other outstanding books. The long list included four other Pitch titles: The Hollow Crown; Gunner, My Life in Cricket; Cricketing Caesar and If Not Me, Who? The Story of Tony Greig, The Reluctant Rebel.

Judges’ Chair Robert Winder said: “The judges were spoiled for choice this year, which means that some excellent books were, with reluctance, left out. The resulting shortlist does, however, reflect the many ways in which modern cricket – and cricket writing – is changing.”

In the early 80s, 20 West Indian cricketers were paid more than $100,000 each to take part in rebel tours of apartheid South Africa. When they returned home to the Caribbean they were banned for life and shunned by their countrymen. Some turned to drugs, some to God, while others found themselves begging on the streets. This is their untold story.

The Thin White Line is the gripping account of the spot-fixing scandal of 2010 which sent shockwaves through cricket. Taking the reader hour by hour through the fateful events of that August and beyond, it reveals how the News of the World uncovered the criminality of the Pakistan captain and his two best bowlers, and how its star reporter would follow them to jail.

Cricket, England's gentle summer game, was shaken to its core by demonstrations, strikes, arrests and violence amid growing global disgust at apartheid, ahead of South Africa's planned 1970 tour. One of sport's leading social historians tells the astonishing story of a cricket tour framed in a landscape of turbulent social history.