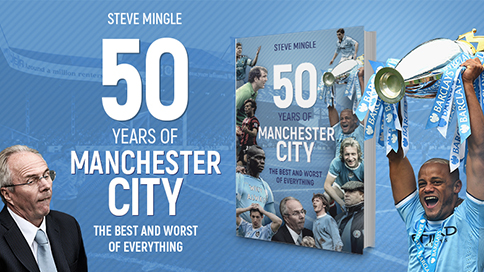 To celebrate 50 years of watching Manchester City, Steve Mingle presents an array of memories spanning the whole period. The Best and Worst of Everything includes heroes and villains, triumphs and disasters, moments of genius and heinous cock-ups. Here are Steve’s most memorable games, players and incidents in a weird and wonderful range of categories.

There’s much to look back on with affection – the greatest wins at Old Trafford, the Goat’s spawniest finishes, Bell’s finest goals, the best wins with ten men – but also plenty of pain, as Steve looks back on the worst goalkeeping howlers, most costly own-goals and biggest refereeing stitch-ups, as well as revealing City's most powerful jinxes.

Amongst all this, Steve selects his favourite comedy chants, pie eaters and goal celebrations as well as providing hard statistical input – who have really been City’s penalty kings? Who do we wish we could have played every week? It’s a fascinating book packed with memories good and bad, full of debating points for City fans of all ages.

50 Years of Manchester City not only embraces the best and worst of everything sky blue, but also unearths some surprising and unusual nuggets from the club's unique history, including:

Click here for more information, or to read a sample from Fifty Years of Manchester City