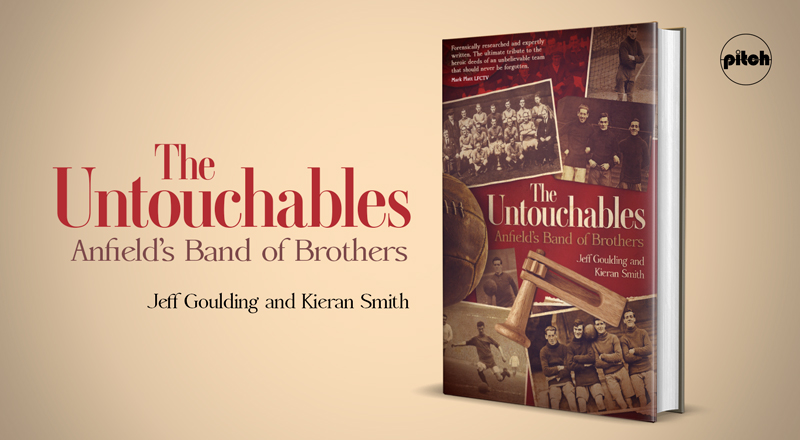 JOIN US FOR THE UNTOUCHABLES LAUNCH

JOIN US FOR THE UNTOUCHABLES LAUNCH

A host of Liverpool legends and family members of players from teams of the 1920s to 1960s will be at the launch event for renowned Liverpool FC authors Jeff Goulding and Kieran Smith's new book The Untouchables: Anfield's Band of Brothers.

Jeff will also have copies of his previous book, The Lost Shankly Boy: George Scott’s Anfield Journey (Liverpool FC), which did not have a book launch due to Covid-19 lockdown restrictions.

The launch – held at Taggy's Bar, Anfield Road, Liverpool, on Friday, 8 October at 7pm – is the perfect opportunity to have your photo taken with ex-Liverpool stars and get copies of either book signed by the players and Jeff himself.

The Untouchables: Anfield's Band of Brothers chronicles the rise and fall of one of Liverpool's greatest teams. Rising from the ashes of war, they developed into a band of fierce characters, so formidable they were considered untouchable. Meticulously researched and lovingly told, the book breathes new life into a fascinating, long-forgotten story.

About The Lost Shankly Boy

The Lost Shankly Boy tells the story of George Scott, a poor boy from a fishing village in Aberdeen, who dreamed of football glory and ended up rubbing shoulders with one of the game's greats, Bill Shankly. It is an untold story of a dream crushed and a career rebuilt in Scottish football and taken to new levels in the South African Premier League.

Jeff Goulding is the author of six books with Pitch Publishing that cover the history of Merseyside football. Jeff's work has featured in This is Anfield, These Football Times, The Liverpool Way, RedMenTV, Red All Over the Land, the Liverpool Echo, LFC Magazine and LFCTV. He has been a regular feature writer for This is Anfield for many years. He lives with his wife and family in the home of his birth, Liverpool, and is a season-ticket holder at Anfield, where he has spent more than 40 years supporting the club from the iconic Spion Kop.