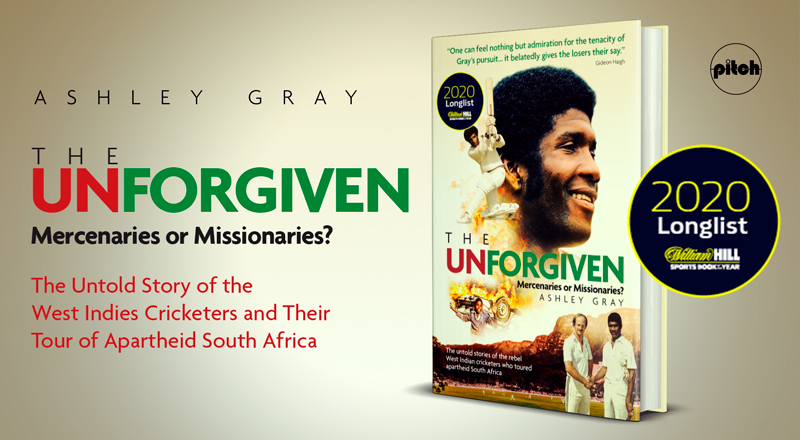 Pitch author Ashley Gray has made history, as the first authors to be highly commended by the Cricket Writers' Club as they announced their annual awards.

Gray missed out to Duncan Hamilton in the Book Award for 2020, but the club took the unprecedented step of commending The Unforgiven, due to the incredible strength of this year's titles.

Their press release said, 'Acknowledging the strength of the competition, the panel decided for the first time to highly commend a second book, The Unforgiven, by Ashley Gray, from Pitch Publishing.

'Gray tracked down the so-called West Indian ‘rebels’ who toured South Africa in the 1980s to discover the reasons behind the decision to visit, and the long-term consequences.'

Hamilton was named winner of the CWC Derek Hodgson Book Award for 2020 in a unique moment for the highly-acclaimed author.

His biography of Neville Cardus, The Great Romantic, published by Hodder & Stoughton, was chosen from a shortlist of six by a panel representing the Cricket Writers’ Club.

The Unforgiven has also been longlisted for the William Hill Sports Book of the Year.

In the early 80s, 20 black West Indian cricketers were paid more than $100,000 each to take part in rebel tours of apartheid South Africa. Some, such as Lawrence Rowe and Alvin Kallicharran, were household names in the Caribbean and around the world, while others were fringe players seeking a short cut out of poverty.

For the first time, the judging panel (chaired by @richardjhobson) also acknowledged a "highly commended" entry, which is @AshG66's The Unforgiven. @PitchPublishing