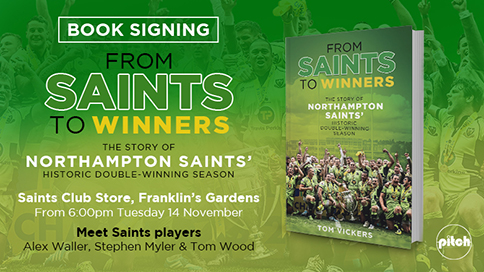 Saints fans - don't miss out on the evening of Tuesday 14 November, when star players Alex Waller, Stephen Myler and Tom Wood will be joining From Saints to Winners author Tom Vickers at a signing event at the Saints Club Store.

You'll be able to meet and chat with Tom and the players, who will be signing copies of the book and telling the fantastic story of the club's historic Double-winning season.

From Saints to Winners: The Story of Northampton Saints' Historic Double-Winning Season tells the tale of a campaign bookended by tragedy, but laden with glory. Jim Mallinder's Saints marched all the way to three finals, winning two of them, as they secured the first Premiership trophy they craved, as well as Challenge Cup glory.

The previous summer had seen the death of Leon Barwell, who did so much to bring success to Northampton, and Saints went on to do their late chairman proud. There was more heartache to come as Luis Ghaut, the young man so many had taken to their hearts, sadly passed away at the start of the following season; but courageous Luis had been able to lead his favourite team out at Twickenham and saw them win two trophies before he lost his battle with cancer.

It was a season that he was able to treasure, and one that no one who witnessed it would ever forget. The story is told by Tom Vickers, the local journalist who covered every game, home and away, and by the players and coaches who made it possible.

A  tale of agony and ecstasy unfolds over the course of Northampton Saints’ most unforgettable season. Read From Saints To Winners and you will discover:

Click here for more information, or to read a sample from the book From Saints to Winners.