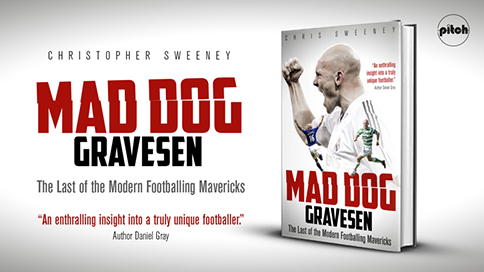 'MAD DOG' HAS HIS DAY

'MAD DOG' HAS HIS DAY

Inspired by the publication of Chris Sweeney's 'Mad Dog Gravesen,' UK newspapers and websites have recently been delving into the world of maverick footballer Thomas Gravesen...

“It was the old gym, it's about 60 yards long. Thomas and Wayne, they were shooting fireworks at each other. They had big rockets full of gunpowder, they were holding one end and shooting them at each other. Tommy was mental in a good way. He was a great player and we loved him. He wouldn't listen but it wasn't in a bad way. He was a good lad but mental.” --David Moyes, quoted by GiveMeSport.com

"There was a bizarre incident while at Hamburg in which Thomas and partner-in-crime Allan Jepsen decided to have a laugh one afternoon. They covered the entire wellness area at the team’s training base in foam, soap and shampoo, so it became their own personal giant, infinity-style swimming pool made of bubbles. The pair got naked and began sliding through the whole building all the way to the swimming pool, where they launched in by doing cannonballs." --The Independent

"There was one time at Celtic where the manager was doing a team talk, and he’s very passionate about this team talk, and he’s getting right into it, and one of the players looks around and hears Thomas sitting in the dressing room, with a newspaper with the eyes cut out, looking through it, listening to the team talk. He was just cut from a different cloth, just totally, totally different." Chris Sweeney interviewed in Between the Lines

The Spanish giants had a squad filled with star names, including Roberto Carlos, Zinedine Zidane, David Beckham, and Brazilian striker Ronaldo - who was their star man at the time. But that didn't deter Gravesen from throwing his teammate around the club's training ground in a fracas which resulted in Ronaldo laying on the turf with a tooth missing." --The Mirror

“Thomas bought himself these lovely cars. “He bought an F50 pick-up truck and he had a Porsche and another car. Then months later, I came in and there’s a banged-up Nissan Micra in the car park. I asked the kitman, ‘Whose is that?’ He said: ‘Thomas Gravesen has sold all his cars and that’s his car’. For six months, Thomas Gravesen was rolling around Liverpool in a green Nissan Micra. He was mad as a box of frogs.” --Kevin Campbell quoted in the Liverpool Echo.

Click here for more information, or to read a sample chapter from Mad Dog Gravesen: The Last of the Modern Footballing Mavericks

Thomas Gravesen was the last of the modern football mavericks, once dubbed ‘a grenade with the pin pulled out’. Hailing from rural Denmark, he fulfilled his childhood dream of becoming a top player but never lost his unique identity, earning a reputation for his bizarre antics and eyebrow-raising behaviour.

Gravesen lined up for Real Madrid’s glamorous Galácticos and enjoyed colourful spells at European giants Hamburg, Everton and Celtic. Remembered as a cult hero at all of his past clubs, he is a truly fascinating individual. After abruptly ending his career and disappearing, he re-emerged years later in bizarre circumstances in Las Vegas.

Did he really lose $54 million at cards? Did he really bring dynamite to training, and spend his summers in a dark basement? Known as a ‘unicorn’ due to his mysterious life, this is a fascinating, helter-skelter journey into the mind of ‘Mad Dog’. Team-mates, coaches and friends recount what it was like to be swept up in the surreal whirlwind of the most unorthodox individual they’ve ever encountered.