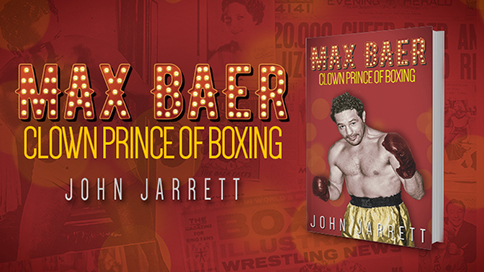 They called Max Baer the 'Clown Prince of Boxing'. But back in 1933 he showed all the speed, strength and courage it takes to make a champ when he smashed Max Schmeling to defeat in ten brutal rounds. This clown could fight. A year later, Baer was heavyweight champion of the world, beating Italian giant Primo Carnera.

New York loved the handsome Californian. Broadway was his playground and he was never short of playmates. From a $4-a-day foundry worker, Baer's rise was rapid. He was a natural for Hollywood, and his radio and vaudeville engagements alone brought in $250,000. He bought so many suits he couldn't keep track of them; wore a new hat every week; bought a house like a hotel.

Tragically, Baer was just 50 years old when he died from a heart attack in November 1959. This is the fascinating story of an iconic boxing figure who achieved so much in a life too short.

As Damon Runyon said: “There have been many greater fighters than Max Baer but never a greater showman.” In Max Baer: Clown Prince of Boxing you will discover:

Click here for more information, or to read a sample from Max Baer