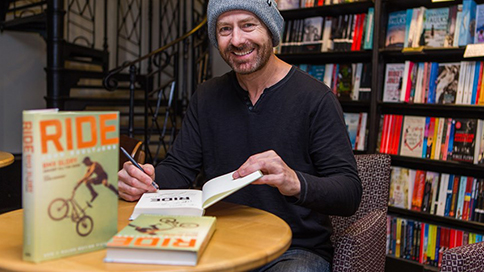 With a Hollywood biopic set for release later this year, BMX superstar John Buultjens appears in his native Glasgow in March.

John will be performing an hour-long talk as part of the Aye Write Festival. He will be accompanied by Chris Sweeney, his collaborator on his autobiography, Ride.

Tickets cost £10.00 in advance. On the day, John and Chris will be chatting to fans and signing copies of the book.

Ride lays bare the harrowing beginnings and the tough life lessons learned by Scottish superstar John Buultjens on his rise to BMX Glory, Against All the Odds.

Raised by his poor family on Glasgow’s Drumchapel estate, he slept rough to escape his violent father’s beatings. Placed in a children’s home by his mother, he was then adopted by a bi-racial couple. After conquering his own racism, life turned around, and the blockbuster movie E.T. inspired a love of BMX. Although spurred by bitterness, John’s emigration to Australia saw him take his sporting enthusiasm to new levels, becoming one of BMX’s biggest names.

Then came the call from California to lead the most famous BMX brand of them all, Haro. As their global brand manager, he now backs and sponsors riders across the globe. In Ride, John reveals inner secrets including family murders, hatred, sexual abuse – and how his white-knuckle ride has taken him to the top against all the odds.

Click here for more information, or to read a sample from Ride.