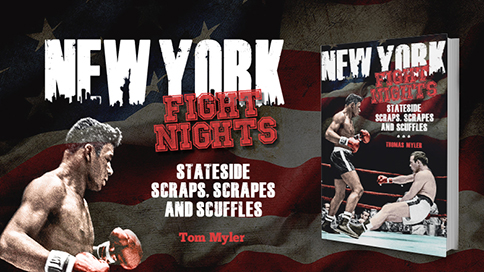 No city in the world is more associated with world championship boxing than New York. So take a ringside seat on the city’s greatest ever fight nights. Join the roaring crowds at iconic venues including Madison Square Garden, the Yankee Stadium, the Polo Grounds and the Long Island Bowl – in the company of boxing historian Thomas Myler.

Soak up the atmosphere and enjoy all the inside stories, including the riot following the Riddick Bowe-Andrew Golota farce, and the human buzzsaw that was Henry Armstrong against Barney Ross. James J Braddock shocked the boxing world to become boxing’s ‘Cinderella Man’ by taming Max Baer, while Tommy Farr upset all predictions by staying 15 rounds with the feared Joe Louis.

New York Fight Nights is a wide-ranging, exciting trip through boxing history which enables you to follow Floyd Patterson’s historic battle with Ingmar Johansson, to witness Randolph Turpin’s tragic downfall against Carl Bobo Olson – and the Harry Greb-Mickey Walker slugfest that continued outside on the sidewalk.

New York Fight Nights is the first book of its kind – a ringside ticket back in time to the greatest ever bouts in the big-fight capital of the world:

Click here for more information, or to read a sample from New York Fight Nights.