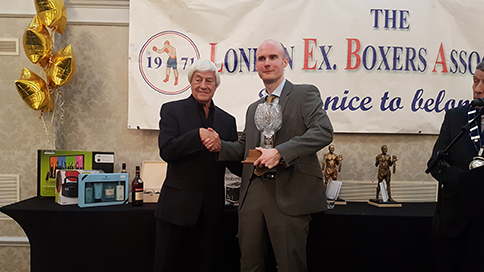 The Reg Gutteridge Award for services to boxing media was presented to Alex by Colin Hart of The Sun, renowned boxing journalist and International Boxing Hall of Fame inductee, on behalf of the London Ex-Boxers Association at the group’s annual awards dinner.

The event, held at the De Vere Grand Connaught Rooms in London on 18 February, was attended by numerous former world, European and British champions, along with other boxing luminaries such as Hall of Fame promoter Frank Warren.

Alex writes the history-themed Yesterday’s Heroes column for the trade magazine Boxing News. He is also the author of Pitch Publishing title Fighting Men of London: Voices from Inside the Ropes.

Alex’s latest book is Born to Box: The Extraordinary Story of Nipper Pat Daly. It chronicles the life and unique career of Alex’s paternal grandfather, a lost legend of boxing who was arguably the sport’s greatest ever prodigy. A pro at age ten, by 14 Nipper Pat Daly was beating grown men in 15-round fights and at 16 ranked in the world’s top ten. Tragically, though, he was overworked and forced to retire at 17.

Read Born to Box and you will discover:

Click here for more information or to read a sample from Born to Box.