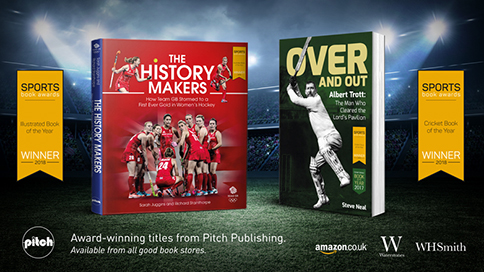 Congratulations go out to Steve Neal and to Richard Stainthorpe & Sarah Juggins, whose books have picked up prestigious honours at the annual Sports Book Awards.

Steve Neal's book Over and Out, Albert Trott - The Man Who Cleared the Lord's Pavilion won the Heartaches Cricket Book of the Year, having last year already scooped the Cricket Writers' Club Book of the Year Award.

“I’m absolutely delighted," Steve said. "It’s particularly nice to win it at Lord’s. I’m glad that people recognise the contribution that Albert Trott made to the game. It’s very difficult sometimes to bring to life players from a long time ago, but I’m glad the judges picked up on his story.”

Richard and Sarah's The History Makers: How Team GB Stormed to a First Ever Gold in Women's Hockey won the Thomson Reuters Illustrated Book of the Year.

“We’re absolutely thrilled," Richard said, interviewed alongside co-author Sarah and 2016 Gold medal winners Hannah Macleod and Georgie Twigg. "We just wanted to tell the best story we possibly could about what was an amazing achievement."

"Nine million people tuned in that night. Non-hockey players were talking about this, so we knew there was a story," added Sarah Juggins. "It wasn’t exactly an easy ride – there was a down point, the World Cup, and an up point with the Gold medal, and everything that happened in-between, so it was a great story to write.

"For us as authors it was our Oscar moment. It was brilliant to be on stage waving the baton for our sport."