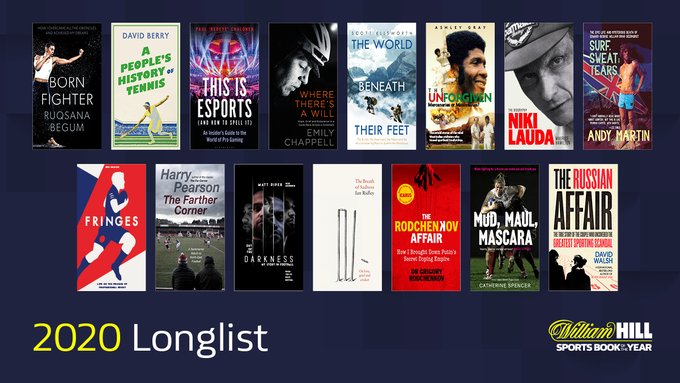 Pitch Publishing are delighted to report that two of our titles have been longlisted for the 32nd annual William Hill Sports Book of the Year awards - the world’s oldest and richest sports writing prize.

Ashley Gray's The Unforgiven - also shortlisted for the Cricket Writers' Club award - and Matt Piper's autobiography Out of the Darkness, written with Joe Brewin, are both on the 15-book list.

Publisher Jane Camillin commented, "We are thrilled for Ashley, Matt and Joe. These are two excellent books and incredibly proud of our authors to be longlisted.

"Ashley has poured his life and soul into his work on The Unforgiven. It has been a two-decade project and one which has travelled thousands of miles, spending hours tracking down players and perfecting his work and creating what can only be described as a superb piece of journalism and writing.

"Matt's story is one of despair and salvation, but ultimately incredible bravery. It is one which should shine as a beacon of hope for others, footballers or otherwise, who may be treading a similar path. It is beautifully written alongside his co-author Joe. Both books are fully deserving of their selection."

In the early 80s, 20 black West Indian cricketers were paid more than $100,000 each to take part in rebel tours of apartheid South Africa. Some, such as Lawrence Rowe and Alvin Kallicharran, were household names in the Caribbean and around the world, while others were fringe players seeking a short cut out of poverty.

Out of the Darkness; From Top to Rock Bottom: My Story in Football is the gritty and hard-hitting autobiography of former Leicester and Sunderland winger @_mattpiper. Written with @JoeBrewinFFT this book reveals what happens next when dreams are smashed. @PitchPublishing #WHSBOTY pic.twitter.com/U7Z5CvAuP9

Out of the Darkness

Out of the Darkness is the gritty and hard-hitting autobiography of former Leicester and Sunderland winger Matt Piper, the ex-England U21 hopeful whose dreams were shattered when an injury ended his football career at the age of 24.

After making history as the last-ever goalscorer at Filbert Street in 2002, Matt was forced into a £3.5m move to Wearside amid the Foxes' financial misery. But that high was short-lived and soon his ambitions - and life - crumbled.

After 16 operations, failed comebacks and anxiety attacks, he retired with money in his pocket but no clue where to turn next. Soon, Matt's daily existence became dependent on alcohol and Valium, waking up in hospital with no idea why, with doctors suggesting he be sectioned.

Out of the Darkness reveals another side of football - what happens next when things don't go right and how to overcome life's worst demons. Matt's frank and often troubling revelations are complemented by hilarious tales of dysfunction amid life at two of English football's biggest clubs.

This year’s list has been carefully chosen from a record 152 entries and includes a diverse mix of authors from a wide range of sports including; tennis, football, rugby, cricket, cycling, formula one, surfing, Muay Thai, mountaineering and, for the first time in the awards’ history – esports.

Following Duncan Hamilton’s historic triple crown in 2019, organisers are looking forward to naming a new winner this time around - with no previous victors featured on the longlist.

The impressive longlist comprises remarkable tales of courage and defiance, feats of incredible endurance, hard-hitting autobiographies and heartfelt memoirs, as well as revealing accounts of the darker side of sport.

The shortlist of six books will be announced on Tuesday, 27th October. The shortlisted authors will each receive £3,000 and a specially bound copy of their book.

The 2020 winner will be announced on Thursday, 3rd December at the new home of the WHSBOTY, Tottenham Hotspur Stadium.

The winner, decided by the judging panel chaired by Alyson Rudd, will collect a cheque for £30,000 and the prestigious William Hill Sports Book of the Year trophy.

Review panellist and renowned sports broadcaster Matt Williams said, "I'm beyond thrilled to be involved in picking the longlist for an award that I've followed closely for years. I've relished immersing myself in the record number of entries and, although it was tough for the panel to narrow it down, I'm immensely proud of the longlist.

"There are startling stories, brutal confessions and even the odd laugh. I'm also delighted to see the number of diverse stories in the running for this prestigious award.”

Last year’s grand prize winner, Duncan Hamilton, remains the only author to have won the award three times, taking top honours in 2019 for his biography The Great Romantic: Cricket and the Golden Age of Neville Cardus – and has since become a Sunday Times Bestseller.