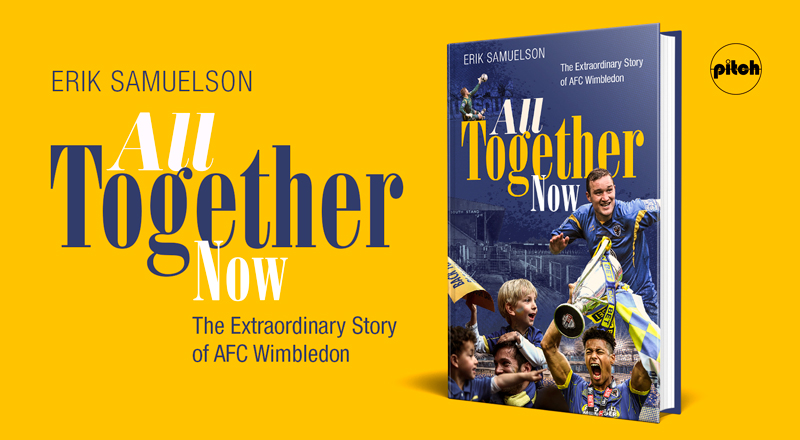 Join author and former AFC Wimbledon CEO Erik Samuelson and hear him recount the club’s remarkable story, of how the team and fans defied the odds to bring their side back to the Football League and back home to Wimbledon after being robbed of their beloved club, Wimbledon FC. It’s the ultimate story of football-fan power!

Erik’s talk – held on Sunday, 19 September from 4pm to 5pm – is part of the five-day Sunset Festival on Wimbledon Common. Each pair of tickets (£20) includes a copy of All Together Now: The Extraordinary Story of AFC Wimbledon. The event is a ‘must’ for AFC Wimbledon fans and a great opportunity to meet the author and get a signed copy.

Learn more about the talk or buy tickets

All Together Now is the extraordinary story of how a group of football fans refused to accept a wrong decision and rebuilt their club from scratch as AFC Wimbledon. Former CEO Erik Samuelson tells the inside story of how they re-established themselves in the Football League and returned home to a brand new stadium in Wimbledon.

Erik Samuelson used to sit with his family behind the goal supporting Wimbledon FC. When the club was hijacked to Milton Keynes he gave up his role as a partner in City giant PwC to be finance director and then CEO of AFC Wimbledon, the re-formed club. From 2002 he was at the heart of the club and was paid a nominal £1 a year. He stepped down in 2019 but continues as chair of its charitable arm, AFC Wimbledon Foundation.