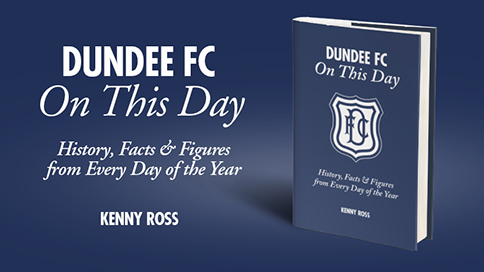 DUNDEE FC - THIS WEEK IN HISTORY

DUNDEE FC - THIS WEEK IN HISTORY

Dundee FC On This Day is a journey, in diary form, through the history of the famous Dark Blues. With individual entries for every day, the book includes all the club's big matches – from the joy of title wins and cup runs to the pain of relegations and administrations.

Being a Dundee fan is a rollercoaster journey, and Kenny Ross's Dundee FC On This Day perfectly captures the thrill of the ride.

As a sample of the book's Dee-lights, here's some of the Dark Blues' highlights this week in history...

Wednesday 8th August 1979 Dundee knock Kilmarnock out of the Anglo-Scottish Cup on away goals after a 3-3 draw at Rugby Park. A Jim Shirra strike earns Dundee a 1-1 draw at Dens two days before and goals from Eric Sinclair and Ian Redford (2) make the aggregate score 4-4 but it is enough to see the Dark Blues through.

Saturday 9th August 1952 Dundee face Raith Rovers at Dens in the first match in defence of the League Cup they had won at Hampden the previous year and they kick off in the white kit they had worn in the Scottish Cup final in April. It is the first time therefore that a club badge has been worn in a match at Dens and a healthy crowd of 20,000 turn up for the new campaign to watch Dundee win 2-1 thanks to goals from Gerry Burrell and Billy Steel.

Saturday 9th August 2014 Dundee unveil their SPFL Championship winning flag before a 1-1 draw with Kilmarnock in the first game of the Scottish Premiership season. Dundee mark their return to the top flight by sharing the spoils with Killie and it is their former player Gary Harkins who wins and then converts a penalty to give The Dee the lead. It lasts less than ten minutes when Craig Slater hits home a superb free kick.

Tuesday 11th August 2015 A James McPake 94th minute goal sees Dundee come back from 2-0 down to draw 2-2 with Dundee United at Tannadice. Blair Spittal appears to shatter The Dee’s hopes with two second half goals but with nine minutes left Greg Stewart hits a beautiful curling effort into the top left hand corner from the edge of the box to give the Dark Blues’ hope. As the game moves into injury time Scott Bain somehow gets his fingertips to Scott Murray’s shot to tip it onto the underside of the bar before Dundee go up the park to equalise. A United clearance falls to Charlie Telfer 30 yards out but he is robbed by Gary Harkins who hits a long range effort at goal. Goalkeeper Zwick can only push the ball away and McPake slides in to score and send the Dundee fans wild with delight.

Saturday 12th August 1893 For Dundee FC it truly is ‘The Glorious Twelfth’ as they play their first ever match against Rangers at West Craigie Park. After falling two goals behind, inside-left Sandy Gilligan scores Dundee’s first ever goal. This sparks a revival in which Sandy Keillor and Jimmy Dundas put Dundee 3-2 ahead but before the end, Rangers’ John Gray completes both his hat-trick and the scoring for the game. “Thus has Dundee been successfully launched on its League career”, comments The Advertiser and the fledgling homesters can be well pleased with their 3-3 draw.

Thursday 14th August 2003 Dundee first premier European match in 29 years is a tricky Uefa Cup preliminary round tie with KS Vllaznia in Shkoder but The Dee come back from Albania in the first leg with a 2-0 win. Just 100 diehard Dees make the trip after British Embassy security concerns and although Vllaznia are useful enough in possession, the Dark Blues settle quickly before an 11,000 crowd in the Loro Borici Stadium. In 41 minutes Steve Lovell gives Dundee a priceless away goal and another strike from Nacho Novo in the second half ensures it was a suitably triumphant Euro return. Dundee are the first Scottish side to win in Albania; a feat that neither Celtic’s Lisbon Lions nor Aberdeen’s Gothenburg Greats could achieve in their trophy winning European campaigns.

Wednesday 15th August 1962 Dundee expected a home match to open the 1962/63 season to unfurl their Scottish League champions flag but have to wait until the second game in a midweek League Cup sectional tie with Celtic. Lady Provost McManus raises the flag on a specially erected post behind the goal at the TC Keay end in which Gordon Smith scores a 60th minute goal to give the Dark Blues a 1-0 win

Saturday 15th August 1992 With player/manager Simon Stainrod resplendent in the dugout wearing his ankle length raincoat and fedora hat, Dundee defeat Rangers 4-3 at Dens. First, Dutchman Ivo Den Biemen then Ian Gilzean put Dundee in front with headed goals only for Ally McCoist to twice bring Rangers level. Just after the hour Billy Dodds restores Dundee’s lead when he sweeps home Gilzean’s knock-on before Iain Ferguson makes it 3-3 with ten minutes to go. Dundee weren’t to be denied however and when Gilzean is impeded in the box by Richard Gough, Billy Dodds converts the penalty to give the newly-promoted Dee a famous 4-3 win over the reigning champions

Click here for more information on Dundee FC On This Day.