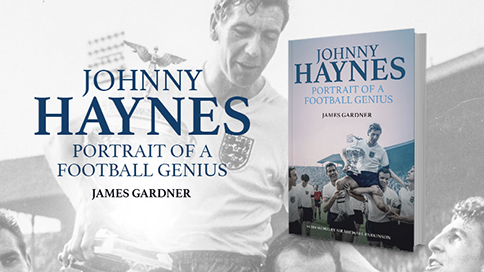 HOW FOOTBALL SHOULD BE PLAYED

HOW FOOTBALL SHOULD BE PLAYED

Johnny Haynes: The Portrait of a Football Genius is the biography of one of England’s greatest ever footballers – a player described by Pele as “the greatest passer of a ball I have ever seen.”

He was capped 56 times, 22 as captain, including the 9-3 hammering of the Scots at Wembley in 1961. He succeeded Dennis Compton as the ‘Brylcreem Boy’. When he became the first £100-a-week player it cemented his celebrity superstar status as the David Beckham of his day. Haynes only ever played for one professional club and finished his playing career in South Africa. He retired into relative obscurity and lived the last 20 years of his life in Edinburgh before tragically dying in a car accident in 2005.

In his obituary, James Lawton wrote, “Haynes was still the beginning and end of how football should be played. He had the wit to change the way the game was understood and played in this country.” His fascinating life story is told through his family, ex-teammates, famous journalists and celebrities as well as his fans.

Read Johnny Haynes: The Portrait of a Football Genius, and you will discover:

Click here for more information, or to read a sample from Johnny Haynes.