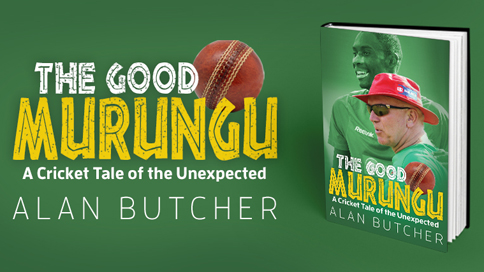 Congratulations go out to Alan Butcher, whose The Good Murungu has today been shortlisted for the prestigious 2017 Cricket Society and MCC Book of the Year Award.

Butch is one of two former England cricketers included on the shortlist, his wonderful tale of cricket in Zimbabwe taking its place alongside Graeme Fowler and his account of his depression and its effects. The six-strong list also includes books from cricket presenter Mark Nicholas and journalist Emma John about their fascination with cricket. Books about cricket in Pakistan and Australia’s Victor Trumper complete the list.

Chair of judges Vic Marks said: “There is some good writing here. All six books reflect passion for and knowledge about their subject matter.  I look forward to lively discussion at the judges’ final meeting; there is no doubt we will come up with a worthy winner."

The competition, run by the Cricket Society since 1970 and in partnership with MCC since 2009, is for books nominated by MCC and Cricket Society Members, and is highly regarded by writers and publishers. Last year’s winner was Simon Lister’s Fire in Babylon: How the West Indies Cricket Team Brought a People to its Feet. Dan Waddell won in 2015 with Field of Shadows: The English Cricket Tour of Nazi Germany 1937.

The £3,000 for the winner, and certificates for all the shortlisted books, will be presented at an awards evening in the Long Room at Lord’s on Wednesday 19th April.  A sell-out audience of 200 people will comprise Members of the Cricket Society and MCC, the shortlisted authors and publishers, as well as some of today’s finest cricket writers and journalists.

The six books on the shortlist (alphabetically by author):

An honorable mention also goes out to Pitch author Andrew Murtagh whose Test of Character made the longlist of 11 books.