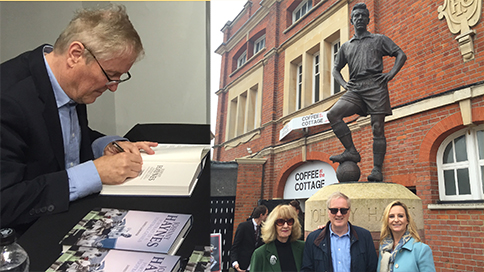 'JOHNNY HAYNES' EVENT AT THE COTTAGE

'JOHNNY HAYNES' EVENT AT THE COTTAGE

On Saturday before the Fulham-Preston match Johnny Haynes author, James Gardner, enjoyed a successful signing event at Craven Cottage. Thanks go out to Fulham FC for their hospitality and kindness, and of course to the clubs' fans for their enthusiasm about the book.

Here, James reports on an exciting and emotional day...

"I arrived at the Fulham store at midday with my brother Steve. We were warmly greeted by Carmelo, Fulham’s media manager, and the store manager Jackie. I was brought quite a few books to sign and also signed some for customers present. This included a young boy who asked me to sign his football shirt in the mistaken belief that I was the ex-Fulham star, Brian Mcbride, who was coming in at 12.30 to do some signing! Fortunately, his mother persuaded him that a copy of the book would be a good Christmas present. Other older fans came in and told me they planned to buy the book nearer Christmas. During my time in the store, Les Strong, the ex-Fulham player who missed the 1975 Cup Final through injury, came in and shook my hand and wished me luck with the book. And other staff told me they had heard it was a 'tremendous book' and were looking forward to reading it.

"Afterwards we met Avril Haynes, her niece Sar, and Melvin Tenner (ex-Fulham Supporters Club Chairman who knew Avril and Johnny) and had some photos taken in front of the Johnny Haynes statue.

"As we entered the Director's Lounge we were greeted by Fulham’s chief executive, Alistair Macintosh, and then were provided with fine refreshments. During our meal, David Daly, a non-executive director, came and introduced Brian McBride to Avril. He was over from the USA to open a bar named after him. After the meal, for the match we had very good seats in the 'Chairman’s Box'. On one side of us sat Martin O’Neill, the Republic of Ireland manager and in front were McBride and his wife. I assume O’Neill was there to study one of the Preston players as none of Fulham’s were qualified to play for his team.

"After being 2-0 down at half time, Fulham managed to level the scores at 2-2 in the 96th minute so my day had come to a perfect end. I was very grateful for Fulham’s hospitality and the friendliness of the staff which couldn’t have been bettered. As a last thought, it was fitting that Preston had been the opposition for Sir Tom Finney, their all-time star player, had been Johnny Haynes’ favourite player and someone he had learned so much from when playing for England."

Click here for more information, or to read a sample from Johnny Haynes.