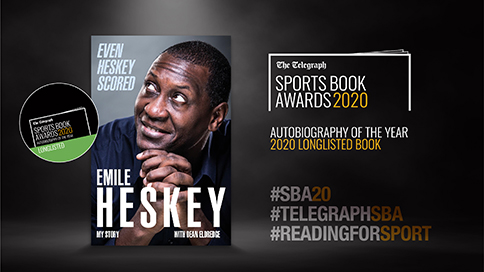 EVEN HESKEY UP FOR AWARD

EVEN HESKEY UP FOR AWARD

Congratulations go out to Emile Heskey and Dean Eldredge as Even Heskey Scored: My Story has been longlisted for the Best Autobiography Award at The Telegraph Sports Book Awards 2020.

Emile and collaborator Dean will face tough competition from 11 other sporting stars including boxer, Tyson Fury (Behind the Mask); BBC Sports Personality of the Year, Ben Stokes (On Fire) and Welsh grand-slam winning captain, Sam Warburton (Open Side).

The Football team of the year so far, Liverpool, feature prominently on the longlist with books from former players and club mates Emile Heskey and Michael Owen (Reboot). Three other soccer players compete for the prestigious Sports Autobiography of the Year: Mark Bright’s brutally honest My Story: From Foster Care to Footballer; England women’s and now Juventus player Eni Aluko’s They Don't Teach This; and Gary Lineker’s collaboration with Danny Baker, Behind Closed Doors, inspired by the number 1 podcast.

The winner of the award will be revealed at Lord’s Cricket Ground on June 2nd 2020. The final shortlist will be announced in April 2020 alongside those from all the other categories in The Telegraph Sports Book Awards in April 2020.

Even Heskey Scored is the revealing autobiography of former footballer Emile Heskey. From humble beginnings, Emile became one of Leicester's favourite sons, as part of Martin O'Neill's swashbuckling misfits. In five years he won promotion, four top-ten Premier League finishes and two League Cups. England called, as did Gerard Houllier and an GBP11 million move to Liverpool, enabling Emile to form a memorable partnership with Michael Owen for both club and country.

Click here for more information or to read a sample from Even Heskey Scored.

Read Emile Heskey’s story and you will discover: