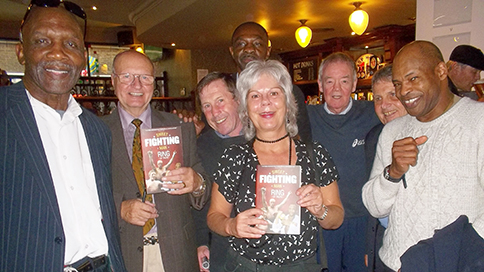 The launch for Melanie Lloyd's Sweet Fighting Man (Ring of Truth) went off with a swing on Sunday, 1st October, at the London Ex-Boxers' Association (LEBA).

Several of the boxers in the book attended, including James Cook MBE, Sylvester Mittee, Steve Holdsworth, Colin Lake, Johnny Kramer and Bunny Johnson. Melanie Lloyd gave a short speech, during which you could hear a pin drop in a room of approximately 150 ex-boxers, which she finished with a moving tribute to the late, great Joe Somerville, who is the fighter who brings the book to a close.

As book launches go, this one was hilariously unpredictable. Due to transport problems, many boxers from all over London strolled through the door at different moments during the day, only to be instantly besieged by autograph hunters. Bunny Johnson’s train from Birmingham was severely delayed and, when he came marching through the door at about 12.30, he was instantly lost in a sea of books.

It was a beautiful laid-back day and every nook and cranny of the huge pub in Old Street was filled with old fighters, some of them former opponents, all happily enjoying each other’s company.

The book was a sell-out on the day, and the feedback so far has been amazing!

Click here for more information, or to read a sample from Sweet Fighting Man

The next two signing dates are: