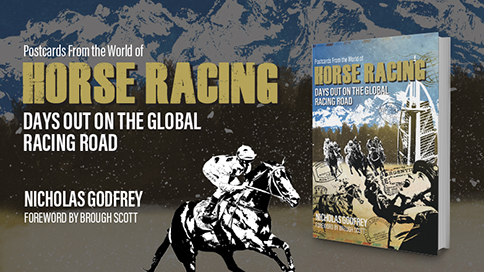 RACING AROUND THE WORLD

RACING AROUND THE WORLD

Postcards from the World of Horse Racing takes in unforgettable, high-profile events at major racecourses (such as the Kentucky Derby at Churchill Downs or the Dubai World Cup at billion-dollar Meydan) and venues on the road less travelled (in Morocco, Uruguay and Switzerland, where they race on a frozen lake in St Moritz).

Among the equine greats encountered along the way are America’s mighty mare Zenyatta, Triple Crown hero American Pharoah and Black Caviar, the ‘Wonder from Down Under’. Each ‘postcard’ includes a ‘how to’ guide for anyone wishing to follow in the author’s footsteps – Nicholas’s own journey culminating at the inaugural running of the world’s richest race, the $12m Pegasus World Cup, staged in Florida in January 2017.

Soak up the exotic atmosphere of global horse racing from Belgium to Buenos Aires, from Mauritius to Morocco...

Click here for more information, or to read a sample from Postcards from the World of Horse Racing.