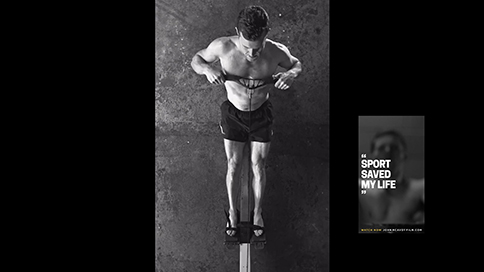 Just So wanted to take it back to John’s routes, the streets of London. A 10-second edit has already been shown on digital billboards and bus stops all over the capital.

You just have to click here to check out John in action at johnmcavoyfilm.com. Or click here to read a sample chapter from the book.

John McAvoy was given two life sentences for armed robbery and aged 22 was the youngest ever prisoner to be housed in the high security unit in Belmarsh (where fellow inmates were Abu Hamza and the London Bombers). While inside, with no formal training and on a prison diet, he broke 3 indoor rowing world records including the longest ever continuous row (45 hours!). Upon release he is becoming a professional Ironman athlete and runs outreach programmes, providing living proof to alienated youth that it is always possible to take another path.

“John is the most focussed man I have ever met. His herculean achievements in endurance sport are matched only by not ending up back in prison - 69% of under 18’s reoffend within 12 months of leaving custody - and if anyone has a chance of showing them there is another way, it’s John. We have loved getting to know him and plan to help him amplify his message in every way we can.” Richard Ascott, Just So

The film was directed by Jonny & Jono and produced by Just So as part of their Postcards series. The beautifully cut, abstract short celebrates a vertical format.

"Like John, we really wanted this film to connect with young people so we made it in a format that matched their viewing habits. These guys watch most content on their phone rather than desktop or TV and vertical video is king of engagement on the phone. Creatively, the vertical format perfectly reflects the claustrophobia of the prison cell so we were really excited by the challenge. " Jono Stevens, Director

A UNIQUE AND GENUINE CALL TO ACTION

John’s primary goal is to become a genuine role model for the right reasons and in response to his wish to be accessible, Just So took the unusual step to end the film with his personal email address and a call to get in touch. John will reply to every message he gets.

“The audience for this film are mobile and hang out together outdoors rather than in coffee shops staring at laptops. Everyone needs inspiration and our media partners recognised that a break from the advertising cycle for such an incredible story is a worthy goal.” Neil Cunningham, Cream

“If I could share one piece of advice with the world it would be that life is not about cars and watches and money. That’s the life you are sold by the media but it’s a mirage. I want to inspire others, especially kids, to stop them looking up to the fake role models they admire. I can tell them – I have seen it.” John McAvoy