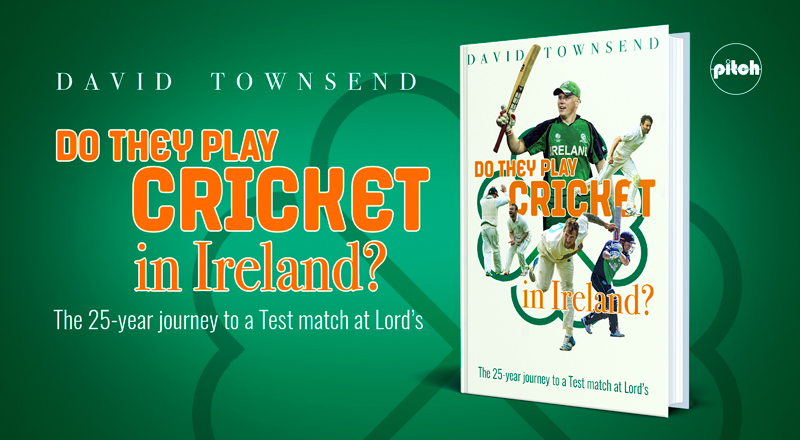 CRICKET Q&A: DAVID TOWNSEND ON DO THEY PLAY CRICKET IN IRELAND?

CRICKET Q&A: DAVID TOWNSEND ON DO THEY PLAY CRICKET IN IRELAND?

In the first of our summer-winter programme of virtual cricket talks author David Townsend will join BBC cricket reporter and commentator Mark Church to talk about his book Do They Play Cricket in Ireland?.

The talk takes place on Zoom this Friday evening at 7.30pm, and to join us for the virtual talk, which includes a question-and-answer session at the end, please visit this page on Friday evening, and click here.

Do They Play Cricket in Ireland? is the inside story of a rollercoaster ride that took the Boys in Green from rank amateurs to playing Test matches, and dismissing England for 85.

Every stage of the journey is charted by a writer who was at the heart of the action: instrumental in Ed Joyce joining Middlesex and the tactician who helped Ireland win their first global tournament.

As friend and confidant to many of the players and coaches who took Ireland to the top table of world cricket, David Townsend is uniquely placed to tell this remarkable story. Written in diary format, in a chatty, humorous style, the book is part travelogue as it follows the team through more than 20 countries and across five continents.

David Townsend went to his first Test match at the age of six, became a freelance cricket writer two decades later and was Middlesex reporter for the telephone information service Cricketcall. During a 15-year career sub-editing sport at The Times, Daily Express and Observer, he was also Mike Gatting's ghost writer. DT began covering Ireland in 1994 and still writes for the Irish Independent while commentating on county cricket for the BBC.

Tonight's talk is the first of our third series of live virtual cricket talks this summer and autumn. After the resounding success of the lockdown-inspired series of 21 different talks, this summer will see nine of our new releases being discussed on a Friday night.

Each talk will see be hosted by BBC cricket commentator and reporter Mark Church, and he will be joined by a different author for each of the talks. They will be free to join and open to all cricket fans and promoted to members of the cricket societies across the country.

Over the years our authors have regularly appeared to speak at events, with many scheduled to appear in person this year.

However, with the restrictions remaining in place due to the coronavirus pandemic, we have elected to continue with this new format, as it has proved hugely popular with fans and society members, and provided a fabulous form of entertainment throughout 2020 and the start of 2021.

The 2021 summer programme will once again see the talks taking place on Friday evenings at 7.30pm and expected to last up to 90 minutes; each will also include a question-and-answer session for attendees. The talks will run throughout the summer and will finish in November.

If you wish to learn more about the titles and authors or purchase those books to read ahead of the talks, please click the links below for further information.

6th August
David Townsend author of Do They Play Cricket in Ireland?

15th October
Philip Brown author of The Colours of Cricket