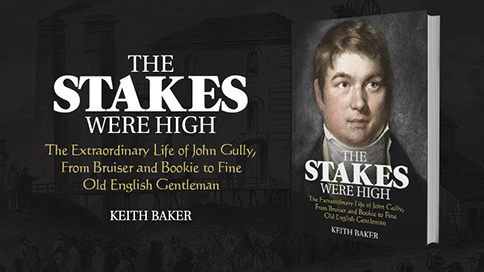 No sportsman of the Regency and early Victorian era enjoyed a more famous or dramatic career than John Gully. The son of a poor butcher, Gully rose to the height of Victorian respectability. The Stakes were High follows his extraordinary and varied life – as a champion bare-knuckle fighter, a hugely successful bookmaker and racehorse owner, a Member of Parliament and colliery proprietor.

Drawing on contemporary sources, the book provides a vivid picture of the sporting scene – a tough, rough and fascinating age of high passion and derring-do. Gambling was a national obsession and no man was better placed than John Gully, as the leviathan of the betting Ring, to experience its greed and corruption, its rogues, feuds and unscrupulous practices.

Some saw Gully as a cunning rascal, a schemer and villain, who successfully exploited and corrupted the betting world. Others admired his courage and daring, his determination and judgement – and he was a man with whom the rich and aristocratic would willingly trust their fortunes.

In The Stakes Were High you will discover:

Click here for more information, or to read a sample from The Stakes Were High