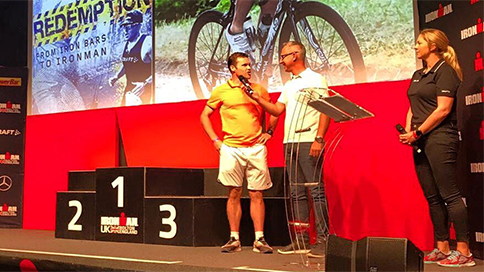 WHEN THE GOING GETS TOUGH

WHEN THE GOING GETS TOUGH

This Sunday’s Ironman UK race in Bolton proved a tough one for John McAvoy, the one-time armed robber and Belmarsh inmate who now has his sights set on a career as a pro triathlete.

But, as usual, the inspirational author of Redemption gave his very best and finished up in motivational form, giving a talk to 700 athletes.

Suffering from a sore throat and feeling that his body was fighting a cold, a lesser competitor might have thrown in the towel. But when the going gets tough...

“Yesterday was probably the most mentally challenging race I've ever done,” John said after the event. “I knew from the swim that it was going to be a long day but I loved the mental side of not giving up for 10 hours and running down that finish line.

“I may not have got the result I was after but I'm prouder of that result yesterday than any race or record I've ever set before.”

On the Monday, John was asked to give a short talk at the awards ceremony to around 700 athletes - pictured here on stage with MC Paul Kaye and Joanne Murphy. It was filmed by Red Bull who were shooting the race for a documentary about Ironman, John and his incredible story, to be aired in the autumn.

Redemption is a gripping and inspirational autobiography written by John McAvoy with Mark Turley.