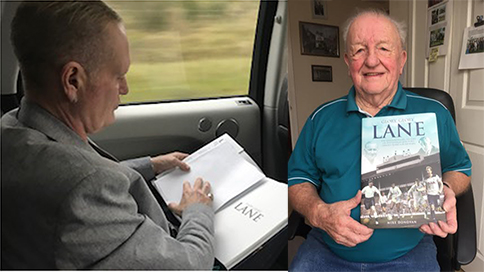 He has two special guests: Andreas Koumi, who will be reciting his poem 'Memory Lane' from his film of the same name. And Terry Dyson, a Spurs Double winner and European Cup Winners Cup hero. The book (£24.99) will be on sale along with Terry Dyson's autobiography (£18.99) and Spurs' Greatest Games (£16.99), two other books written by Mike and published by Pitch. It is cash only but Terry has agreed to sign purchased copies along with Mike.

Who's reading and enjoying Mike Donovan's terrific, emotional, encyclopaedic history of White Hart Lane? Not only Spurs legends Gazza and Terry Dyson, but also the great Jimmy Greaves and a host of high-profile fans...

"Glad I inspired you to be a Spurs fan, Mike. Nice to see a book about the Lane." --Jimmy Greaves

"The book brought back some great memories." --Paul Gascoigne

"I was privileged to be part of Tottenham Hotspur's glorious history at White Hart Lane. I believe Mike Donovan has brought it to life in his excellent book." --Terry Dyson (Double winner and European Cup Winners' Cup hero)

"Beautifully captures a myriad of precious moments, evoking the emotions and conjuring the atmosphere that made an unfashionable part of north London such a wondrous home from home for generations of Spurs fans." --Andreas Koumi, film maker of Memory Lane

"From Bobby Buckle to Harry Kane, it’s got all the facts from White Hart Lane. A must read for all Spurs fans! A splendid book." --Spurs historian Alan Swain

"Glory, Glory Lane is such a marvellous title. I'm ordering a copy right away." --Jilly Cooper, author and football fan.

"It's a wonderful book. I urge anyone to go out and get. Some great pictures I haven't seen before. Not the same old pictures you see. It's delightful." --Mike Leigh, The Spurs Show podcast

"New 'Lane' book out by established Spurs author Mike Donovan. Am assured it is worth a gander." --Tweet from Spurs' Supporters' Trust co-chair, Kat Law

Click here for more information, or to read a sample chapter of Glory, Glory Lane.