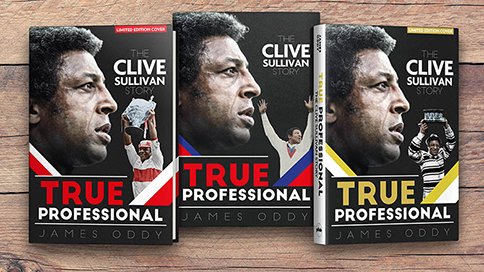 TO HULL AND BACK

TO HULL AND BACK

True Professional tells the story of Clive Sullivan, who emerged from a working-class Cardiff neighbourhood to become an icon of rugby league. Overcoming a major childhood injury and a car crash early in his career, he was a ruthless and thrilling presence on the wings of both Hull FC and Hull KR teams for over 20 years, scoring over 300 tries.

The first ever black Briton to captain a British sports team, Sullivan did so with great success, even lifting a World Cup and being awarded an MBE. He was beloved by rugby league fans and revered following his untimely and tragic death. Yet the wider sporting public overlooked his achievements at the time and his name is rarely mentioned when discussing Britain’s sporting greats.

The book is a snapshot of the working class Northern towns that have long been the heartland of rugby league, and the communities that gave them their unique character. It is also a look at how Clive’s career developed against the backdrop of a declining fishing industry, the lifeblood of the city of Hull.

True Professional offers a fascinating look at the life and career of Clive Sullivan, one of rugby league’s greatest players. The book includes:

Click here for more information, or to read sample chapter from True Professional.