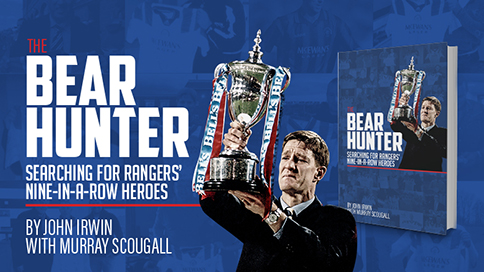 The Bear Hunter is the fascinating and unlikely seven-year story of one football fan's devotion to his team. In 2009, John Irwin began a mission to track down every one of the 86 players who featured in Rangers' nine league title wins between 1988 and 1997 and have them sign his favourite strip. From legends such as McCoist, Laudrup and Gough to journeymen, loanees and youngsters who only turned out for one match, John vowed to find them all.

His obsession took him around the world. From a nightmare trip to Ukraine and a whistle-stop tour of Dubai, to a mayor's office in America and 13 trains across Holland, the number of John's adventures was equalled only by the miles clocked up. Whether it was a fire station in Sheffield or a shortbread factory in the Highlands, amateur detective John left no stone unturned to find each of his heroes.

On the 20th anniversary of Rangers' greatest achievement, this is the nine-in-a-row squad then and now – seen through the eyes of one super-fan who turned Bear Hunter to meet his heroes.

In the famous lyrics of the Rangers anthem, 'Follow Follow', John Irwin went everywhere and anywhere to track down his heroes. His obsession took him around the world and provided him with adventures and memories he’ll never forget, such as:

Click here for more information, or to read a sample from The Bear Hunter