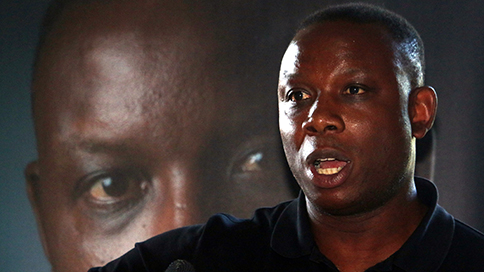 Leroy gave a typically passionate, thought-provoking talk on the spectre of racism in football, and was then interviewed by Gary Smith (Scottish Secretary, GMB), taking questions from the floor. Gary has previously worked with and knows Leroy via Show Racism the Red Card.

There was a full house, with all feedback received being consistently positive, and a number of attendees are now looking to further engage with Show Racism the Red Card both in Scotland and in England.

Leroy finished up chatting with the audience and signing books – a very large pile becoming a very small pile over the course of the enjoyable evening.

Special thanks to Tommy Breslin, Development Officer at Scottish Union Learning, and Gary Smith for their help and enthusiasm in staging the event – also to United Glasgow FC and to Kevin Buchanan for a whole set of excellent photos.

Click here for more information, or to read a sample from It's Only Banter.