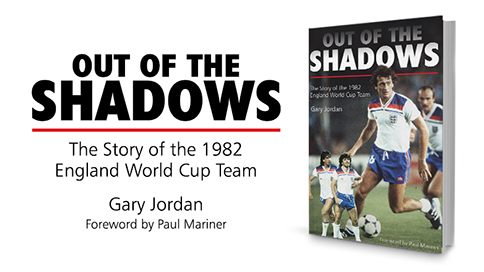 THIS TIME, MORE THAN ANY OTHER TIME

THIS TIME, MORE THAN ANY OTHER TIME

Out of the Shadows: The Story of the 1982 England World Cup Team is a detailed account of how the national side – World Cup winners in 1966 – went through years in the football wilderness, missing two World Cup finals through inglorious failure.

"If you are of a certain age, it’s likely the England World Cup song This Time will be in your head as you read it all. Countless books have been written concerning the England’s team’s history, but very little has been devoted to the Greenwood era and the 1982 World Cup campaign. This book puts that right and gives long overdue attention to England’s return to international football’s biggest tournament after 12 years in the wilderness. We are sure ‘Reverend Ron’ would have given it his blessing." Click here to read the rest of this great review at the England Memories website.

The appointment of Ron Greenwood as manager, replacing Don Revie who left unceremoniously in 1977, led to a change of fortune on the field as he restored faith amongst the fans – some of whom were themselves letting down the country off the field. During a tumultuous qualifying campaign that saw the manager resign on a plane journey home, only to be talked into staying by his players, the team rallied around and reached the finals in Spain.

The gamble in taking two injured but hugely influential star players, Trevor Brooking and Kevin Keegan, almost paid off after they breezed through the early stages. Ultimately, the lack of firepower proved their undoing, despite a late rolling of the dice. They went out of the tournament unbeaten, but Out of the Shadows.

Out of the Shadows is the definitive story of this crucial, fondly remembered phase in the English national side’s rollercoaster history. Read the book and discover:

Click here for more information, or to read a sample from Out of the Shadows.