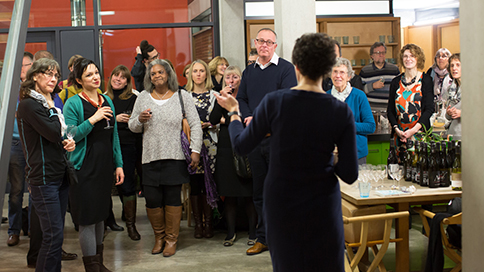 The Maggie’s Centre at Charing Cross Hospital was packed on Wednesday night for the successful launch of Jenny Baker’s book, Run for Your Life. Members of the Ealing Eagles, her running club, were there along with family, friends, work colleagues and several women who went through treatment for breast cancer at the same time. Many of the evening’s guests feature in the book because they are part of Jenny’s story.

Bernie Byrne, the centre manager welcomed everyone to Maggie’s and poet Harry Baker, Jenny’s son, performed some poems he’d written for the event. Jenny said, "I used to get changed and eat lunch here at Maggie’s after running to my chemotherapy appointments, and it’s great to be back celebrating the book." The event raised nearly £300 for Maggie’s through book sales and donations.

Thanks to Jonny Baker for the photograph.

Run for Your Life is Jenny's inspirational story about how running transformed her experience of breast cancer, helping her to rewrite the story of what was happening to her. In it, you will discover how Jenny became a runner, why running makes you stronger in so many ways and how those runs to chemo became a source of life and hope:

Click here for more information, or to read a sample from Run for Your Life.