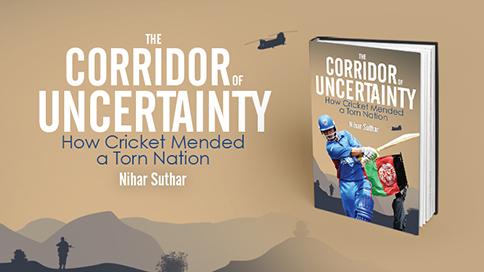 Muttiah Muralitharan, Sr Lanka's legendary spin bowler, has lavished praise on Nihar Suthar's The Corridor of Uncertainty, bringing the book to prominence across Asia just ten months after it scooped Debut Cricket Book of the Year in Cricketweb’s annual awards.

"This is a book like no other with the truth cleverly woven between the indomitable strength of the human spirit and international cricket," the Sri Lankan superstar commented on the book.

"How a handful of young refugees beginning with a mere tennis ball and bat, first defied their own parents and faced up to the brutal Taliban but yet determinedly guided Afghanistan qualify to play in the World Cup 2015 and eventually reach Test cricket status is incredible.

"Well done, Nihar! More strength to your elbow for creating an unique publication with a difference for which I applaud you."

Muralitharan joins Criketweb's Martin Chandler in earmarking the book as something very special. “A superb book and one that deserves to be widely read," Chandler wrote in his review. “There is absolutely no reason why it would not appeal to every single one of the millions of readers who made The Kite Runner a best seller, as well as the rather more modest forty thousand or so who buy Wisden every April. It has the potential to be the biggest selling book about the game of cricket ever written. The most thought provoking book on any subject I have read in years.”

Just as every batsman struggles to hit deliveries in the corridor of uncertainty, the Afghan cricket team faced similar doubts, problems and extreme danger in its quest to mend a war-torn nation.

Click here for more information, or to read a sample from The Corridor of Uncertainty: How Cricket Mended a Torn Nation.