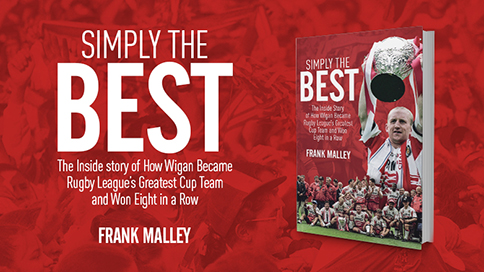 OUT NOW – SIMPLY THE BEST

OUT NOW – SIMPLY THE BEST

The legends of Wigan rugby league’s golden era have been brought together to tell the story of the greatest cup run in the sport’s history.

Shaun Edwards, Martin Offiah, Jason Robinson and Joe Lydon are among more than 20 players who have teamed up to tell the inside stories of how Wigan won eight Challenge Cups in a row between 1988 and 1995.

The book’s title, Simply the Best, is taken from the Tina Turner hit song which became so familiar to Wigan fans during a record run of 43 undefeated Challenge Cup matches that earned the town’s rugby stars a place in sporting history. All royalties from the book are going to the Joining Jack appeal, the charity publicised by England rugby union star Owen Farrell every time he kicks a goal for his country.

The book charts the renaissance of Wigan under coach Graham Lowe and the magical years of John Monie and features a blow-by-blow account of the turbulent 12 months which saw a running feud between Edwards and coach John Dorahy end in the sacking of Dorahy just days before the team flew to Australia to take on Brisbane Broncos in the World Club championship.

At its heart, however, is the magic of Wembley and the camaraderie between players and fans.

The author, Frank Malley, is a former Daily Express columnist and chief sports writer for the Press Association.

The book, which also chronicles the caustic wit of Andy Gregory and, among other quirky tales, relates the considered view of Billy McGinty on the infamous ‘pineapple ring’ incident in the Wembley dressing room in 1993, is not all about glory.

It also records the rejection felt by long-serving fullback Steve Hampson and wing Mark Preston after being ditched as well as the regret of Barrie-Jon Mather at leaving his beloved club.

Gary Connolly, meanwhile, claims the Wigan he joined, following his controversial transfer from St Helens, in 1993 “was the biggest drinking club I ever played for” while hooker Martin Dermott reveals how one of the club’s wilder celebrations ended up with him wearing a lady golf star’s dress.

“The most enjoyable part of writing the book was seeing and hearing the stars of yesteryear reliving their greatest days,” said Malley. “Joe Lydon texted me the day after we had met for an extended interview to say he had not got a wink of sleep all that night because his mind was full of the characters, the excitement and the humour of that time.”

Andy Farrell, who is preparing for his coaching role with the British Lions on their summer tour of New Zealand, is also featured and reveals why he does not rule out returning to coach in rugby league in the future.

The Joining Jack charity appeal was set up by former Wigan player Andy Johnson and his wife Alex to try to find a treatment or cure after their son Jack was diagnosed at the age of four with duchenne muscular dystrophy, a terminal disease.

Click here for more information, or to read a sample from Simply the Best.