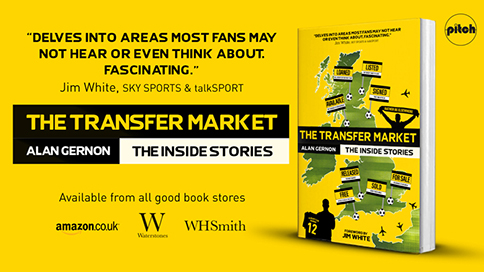 'The Transfer Market' author Alan Gernon discusses the perils and pitfalls of the transfer window with talkSport's Paul Hawksbee and Andy Jacobs.

Did you know that 30% of global transfers between football clubs take place against the wishes of the player involved? Do you know what it takes to become a player agent? Or that only one in five transfer rumours ever come to fruition in a move?

All this and much more in a truly enlightening discussion between Alan and talkSport's ever-popular H&J.

Click here to hear the show broadcast on talkSport... “Fascinating book. The whole picture from every angle on the world of transfers.” – Paul Hawksbee

Click here for more information, or to read a sample chapter from The Transfer Market.

For years transfer gossip columns have been Alan Gernon’s (author of Retired: What Happens to Footballers When the Game’s Up) guilty pleasure. Fed up with the time wasted reading them, he explores how much of these rumours are accurate, planted by agents or simply made-up. And how easy is it to plant a transfer story in the UK media?

Along the way he discovers how the market actually works, how a transfer happens and what a move actually means for a typical player in a world where you could buy over 315,000 League 2 players for the price of Neymar – and where almost 30% of transferred players worldwide are moved between clubs against their wishes.

He also uncovers how to become a football agent overnight, and why British players are reluctant to move abroad. He speaks to players about the pressures and real-life effects of a move on them and their families – and tries to figure out how much the stars of yesteryear would be worth in today’s crazy transfer market, where Premier League clubs spent a record £1.4bn in the summer of 2017 alone.

Alan Gernon takes a unique look at the transfer market from the angles of various stakeholders, including players and their families, agents, clubs, the media​ and more.