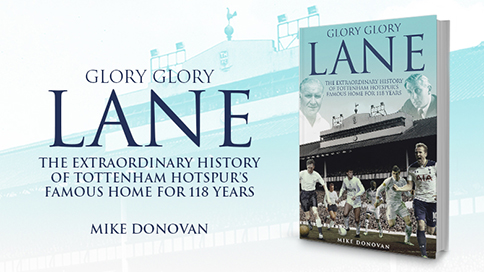 Glory, Glory Lane is the life-affirming history – including a momentous last season – of a world-famous football stadium, home to Tottenham Hotspur for 118 years. A Victorian structure turned wraparound 21st-century all-seater, it became a theatre of dreams for supporters – from English working class to multi-cultural and new-money – all attracted by teams which played the ‘Spurs way’ to achieve glory.

It’s hard to imagine how a new £800m stadium can ever replace the edifice which shut its gates for the last time on Sunday, 14th May 2017, after a victory over Manchester United, having created a daunting legacy.

Glory, Glory Lane is a huge, colourful book packed with photographs and a text which brings alive the big matches, the big goals, the big personalities and the big issues experienced in an iconic stadium built on the site of a former market garden. Written through the eyes of an author whose family have supported the club for the last eight decades. With journalistic objectivity balanced by passion and first-hand experience.

We read how the great managers in the Lane dugout such as John Cameron, Peter McWilliam, Arthur Rowe, Bill Nicholson and Keith Burkinshaw built their reputations. How the community responded to the progress of a club formed by a bunch of schoolboys in Victorian England and went on to achieve global status during its tenure at the stadium.

Decade by decade, we discover how the Spurs faithful see their favourites:

Glory, Glory Lane also breathes life into the world-famous home of the Spurs thanks to exclusive interviews by the author with legends such as Terry Dyson, Alan Mullery, Jimmy Greaves, Darren Anderton, Cliff Jones, and many more.

Click here for more information, or to read a sample from Glory, Glory Lane.