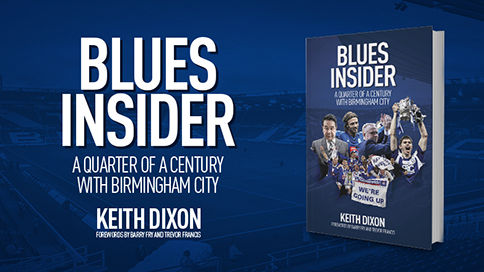 BLUES BEHIND THE SCENES

BLUES BEHIND THE SCENES

Blues Insider is an alternative history of Birmingham City; a fascinating personal collection of behind-the-scenes stories from the past 25 years – straight from the pen of a man who's been on the inside.

A lifelong Bluenose for more than 60 years, author Keith Dixon has written about the club he loves since the 1980s – and it's a career which has taken him on a fantastic journey.

The book takes a fresh approach and looks back at the period and gives a fresh perspective on the club, and gives new insight into the key events. With forewords from two Blues legends from the era, Trevor Francis and Barry Fry, it draws on the author's dealings with the key characters at the club as he sheds new light to bring a quarter of a century at St Andrew's to life.

In Blues Insider, you will discover:

Click here for more information, or to read a sample from Blues Insider