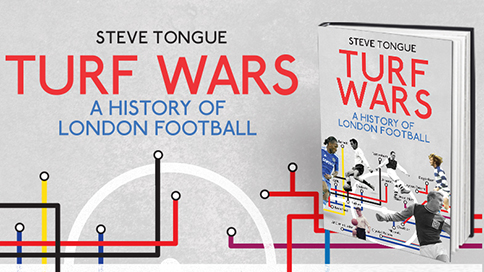 Steve Tongue, author of Turf Wars: A History of London Football, is appearing this Sunday afternoon, 19 November, at the Idea Store WriteIdea Festival in Tower Hamlets.

With a 1pm kick-off, Steve will be reading from his book, signing copies and discussing the curious history London's football clubs.

More details of events over the ninth annual reading festival's three days - 17-19 November - can be found on Twitter @WriteIdeaFest and at the WriteIdea website.

Few cities in the world have as many professional football clubs as London and none have the history explored in this book by journalist and broadcaster Steve Tongue. It was in the English capital that the Football Association – the first of its kind anywhere – was founded in 1863 and that the FA Cup, the world's most famous domestic cup competition, was born.

After the North and Midlands dominated the first forty-odd years of league football, three clubs in particular – Arsenal, Spurs and Chelsea – began to challenge them and eventually succeeded, joining West Ham United as trophy winners not only at home but in Europe.

Between those four clubs, and more than a dozen others past and present, grew the turf wars that are the bedrock of the great rivalries and derbies across England's most vibrant football city. Turf Wars tells the story of football in the capital.

In Turf Wars you will discover:

Click here for more information, or to read a sample from Turf Wars.