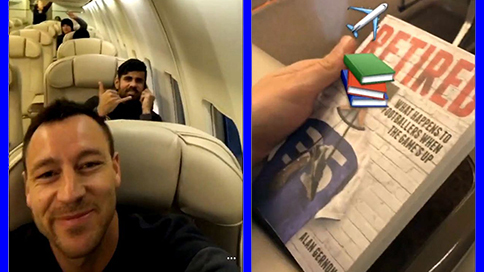 So why don’t you? The book by Irish author Alan Gernon tells the shocking story of what happens to modern professional footballers after retirement. Long-listed for the eir Sports Book of the Year Award, Retired has been described as "the most important football book in a long time" by Niall Quinn, and as “a fine book – a fascinating area” by Hawksbee & Jacobs on talkSPORT Radio.

This from yesterday’s Daily Mail, who broke the story of Terry’s preferred reading matter on a team flight to Liverpool:

“He took a video selfie with Brazilian duo Diego Costa and David Luiz appearing in the background as they made their way to Merseyside in luxury. But the book is sure to raise the most interest as it suggests that Terry will bring an end to a hugely successful career this summer, finishing as a one-club man in professional terms. Published in May 2016, Retired details the financial struggles that many footballers suffer soon after they finish their careers in the game, in some cases even declaring bankruptcy.”

The Mirror also ran the story:

"Almost half of professional footballers face the threat of bankruptcy within five years of their retirement. A third will be divorced less than a year after hanging up their boots. With little or no support from the game to which they gave their lives, many end up addicted, depressed, living with debilitating illnesses, behind bars or even worse. While an elite few may be financially secure, or others may land plum managerial jobs or punditry roles, it transpires that for the majority retirement is something they're not prepared for and lives can spiral into a rapid and depressing decline.”