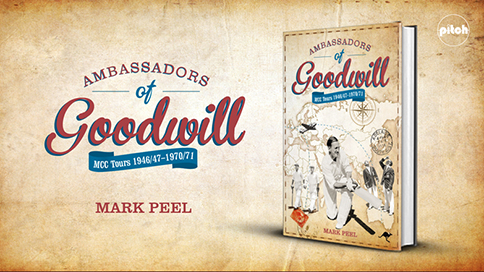 MCC/CRICKET SOCIETY BOOK OF THE YEAR

MCC/CRICKET SOCIETY BOOK OF THE YEAR

We are pleased to announce that 'Ambassadors of Goodwill' has been shortlisted for the prestigious MCC/Cricket Society Book of the Year Award 2019.

Congratulations go out to Mark Peel, whose book on the MCC tours of 1946/47-1970/71 so impressed the judges, who described their six chosen books as offering “a vibrant mix of writing about cricketing personalities and the sport’s history.”

This year’s Chair of Judges Robert Winder said: “The range of titles under consideration, from club to country, from fiction to non-fiction, from Sydney to Swansea via Durban and Delhi – reminds us that cricket is a game that hums with fine writing.”

The full shortlist is as follows:

The overall winner will be announced at an event, in the Long Room at Lord's on Tuesday 16 April 2019.

Click here for more information, or to read a sample from Ambassadors of Goodwill.

Ever since Victorian times, the MCC had embraced the amateur ideal that cricket was more than a game. It was the very essence of camaraderie and good sportsmanship. Yet for all their evangelising, the game’s privileged elite were part of the British establishment which revelled in its national prestige and imperial hegemony. And winning at cricket was essential to maintaining that stature.

Ambassadors of Goodwill assesses the MCC’s attempt to marry these conflicting objectives and foster goodwill within the Empire/Commonwealth via long, formal overseas tours. After the war, the amateur ideal suffered when Len Hutton was appointed England’s first professional captain. His uncompromising leadership brought success on the field but discord off it.

Managers were installed to restore diplomatic harmony but, with the growing upheavals of the late 60s, cricket became increasingly associated with nationality, race and professional cynicism. Ray Illingworth’s controversial win in Australia in 1970-71 clearly signalled the MCC’s waning influence.

Read Ambassadors of Goodwill and you will discover: