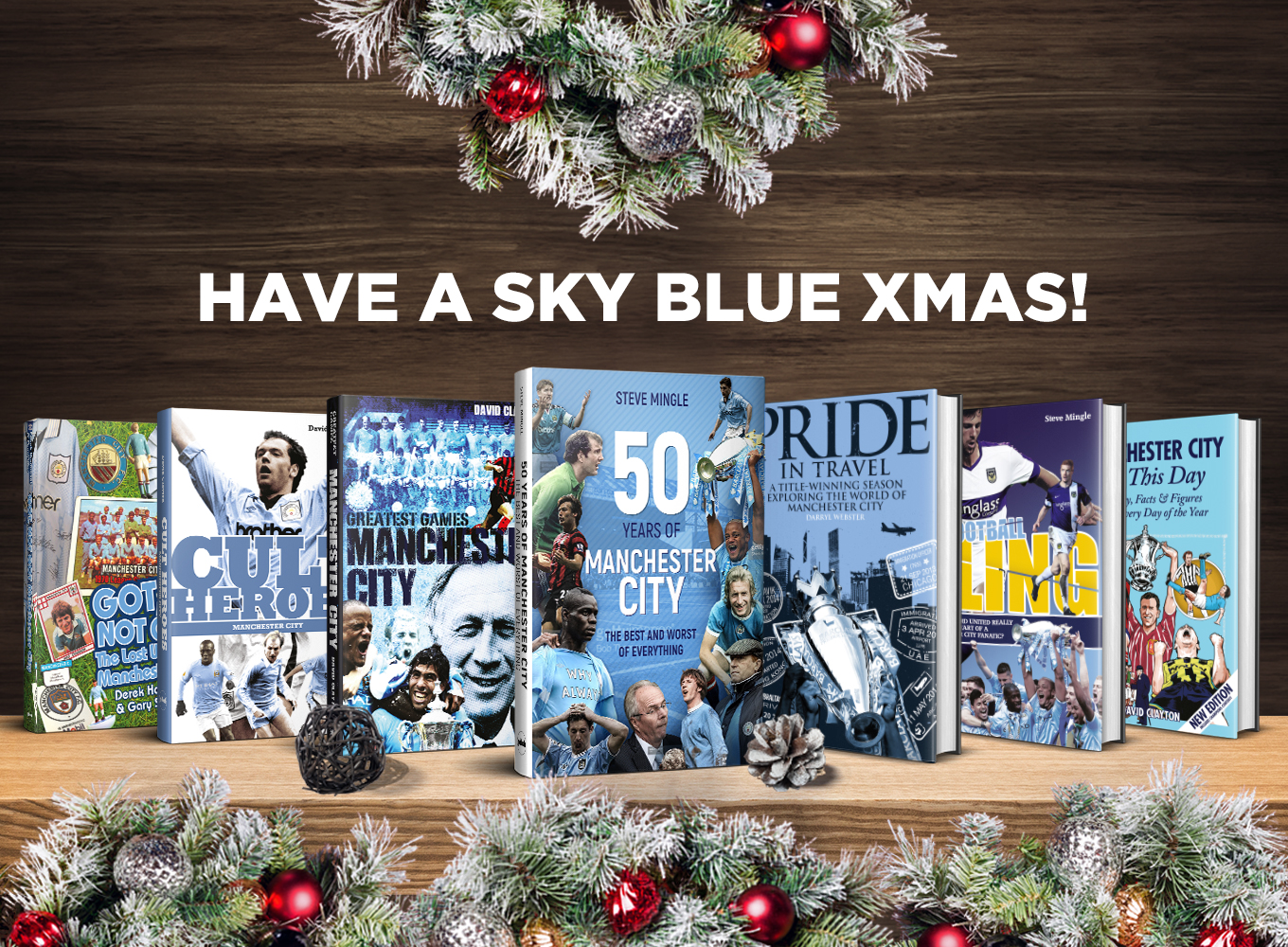 HAVE A SKY BLUE XMAS!

HAVE A SKY BLUE XMAS!

With Christmas fast approaching, it's time to remind Man City fans of the fantastic selection of club titles currently available, including the popular releases 50 Years of Manchester City and Pride in Travel.

All seven of these books make perfect Christmas gifts and stocking fillers for the Man City fan in your life, from Got, Not Got's rich array of memorabilia and memories to Cult Heroes and On This Day. Or why not go ahead and get yourself a festive Man City treat? 50 Years of Manchester City - The Best and Worst of Everything
By Steve Mingle - £16.99

To celebrate 50 years of watching Manchester City, Steve Mingle presents an array of memories spanning the whole period. Heroes and villains, triumphs and disasters, moments of genius and heinous cock-ups - they're all here as Steve describes his most memorable games, players and incidents in a weird and wonderful range of categories. Described in atmospheric and evocative detail, here are 50 of the Sky Blues’ most glorious, epochal and thrilling games of all! Manchester City Greatest Games offers a terrace ticket back in time, revisiting historical highlights including the first and last games at Maine Road, last-day dramas, unforgettable derbies and cup crackers. Pride in Travel  - A Title-Winning Season Exploring the World of Manchester City
By Darryl Webster - £12.99

The 2013/14 season provided a fantastic adventure for Canadian-born Blue Darryl Webster, who travelled over 40,000 miles to visit Manchester City supporters’ clubs all over the world. The captivating story of a season away from home among a wildly diverse range of exotic characters – all displaying the inimitable charm of the ‘Typical City’ fan. Manchester City Cult Heroes is devoted to 20 players who have won a special place in the hearts of the Blues faithful – not necessarily the greatest footballers, but a unique brotherhood of entertainers and stalwarts, local lads and exotic imports who ignited passion on the terraces. Includes Trautmann, Lee and Goater, Rösler, Swift and Tueart. A Football Fling - Could Oxford United Really Steal the Heart of a Manchester City Fanatic
By Steve Mingle - £12.99

When Steve Mingle's financial company became shirt sponsor at League Two Oxford United, it sparked a crazy period for the fanatical Manchester City season-ticket holder. A Football Fling tells the story of two hectic seasons spent following teams at opposite ends of the spectrum, with behind-the-scenes insights into how football really operates. Got, Not Got - The Lost World of Manchester City
By Derek Hammond and Gary Silke - £12.99

Got, Not Got: Manchester City is an Aladdin's cave of memories and memorabilia, guaranteed to whisk you back to Maine Road's fondly remembered 'Golden Age' of mud, mavericks and magic. Here's Lee, Tueart and White on stickers and in comics, City Subbuteo and petrol freebies, league ladders, big-match programmes and tickets, and much more. Manchester City On This Day - History, Facts & Figures from Every Day of the Year
By David Clayton - £9.99

Manchester City On This Day revisits all the most magical and memorable moments from the club’s past, mixing in a maelstrom of quirky anecdotes and legendary characters to produce an irresistibly dippable diary of Blues history. From City’s Victorian roots as a church side up to the Etihad era, there's an entry for every day of the year.