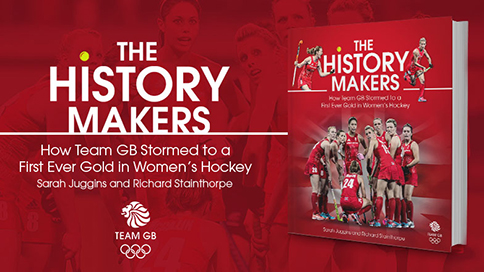 On Saturday 14 July, Sarah Juggins and Richard Stainthorpe will be appearing at Jarrolds bookshop in Norwich, signing copies of their award-winning book and chatting to fans.

The History Makers recently won the Thomson Reuters Illustrated Sports Book of the Year 2018, the award revealed at star-studded ceremony at Lord’s Cricket Ground on June 7.

When Great Britain failed to qualify for the women’s hockey competition at the 2004 Athens Olympics, the sport was at its lowest point. Sliding down the world rankings, there was in-fighting and discord within the squad, no funding and very little prospect of a bright future. Three players – Crista Cullen, Helen Richardson and Kate Walsh – were junior members of that team, and would have been forgiven for walking away at that point.

Fast forward 12 years and the same three players were at the heart of the greatest moment in Great Britain women’s hockey, standing on the podium in Rio de Janeiro with Olympic gold medals proudly hanging around their necks. During the intervening years, the team had undergone a transformation. It had been no easy journey, but a rollercoaster ride of highs and lows, triumphs and disasters – with casualties sustained along the way.

The History Makers is more than an account of a famous victory. It is a story of the hard work, emotional strain and shattering disappointments that go into turning a dream and a vision into a reality. It is a story that culminates in the best Friday night ever, when Team GB women's hockey produced an exhilarating Olympic moment that gripped and inspired the nation.

Behind every success story are a hundred other stories. With access to the athletes who delivered and the coaching staff who masterminded the success, The History Makers brings together the many storylines that created a moment of Olympic magic.

Click here for more information, or to read a sample from The History Makers.