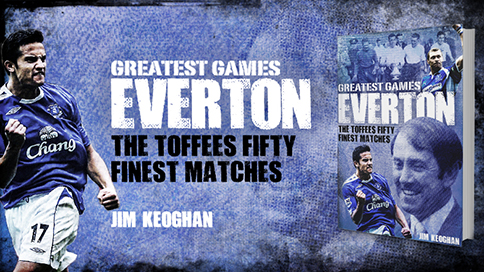 Evertonians know what it is to experience greatness. Since the club first came to life in 1878 there have been titles won, European adventures and trips to Wembley. The fans have seen records broken, legends make their mark, matches of undeniable class. Every decade that Everton have been in existence has yielded moments of wonder, games that supporters at the time have cherished for their entire lives and which fans of subsequent generations have looked back on with undeniable pride.

From the earliest days, when St Domingo's first morphed into something recognisable as a modern football club, the whole span of Everton’s narrative is covered here. Those earliest title wins, those earliest finals, Dean, Lawton, Hickson, the Holy Trinity, Latchford, the glory of Kendall, the agony of Wimbledon, the joy of Royle and restoration under Moyes.

Jim Keoghan's Everton Greatest Games is more than just a selection of the moments that have stirred the soul of Blues. It is the story of Everton, the tale of how a church team grew into an English giant.

Experience the long history of Everton FC through the memories of players, writers and fans who were there at the time:

Click here for more information, or to read a sample from Everton Greatest Games.