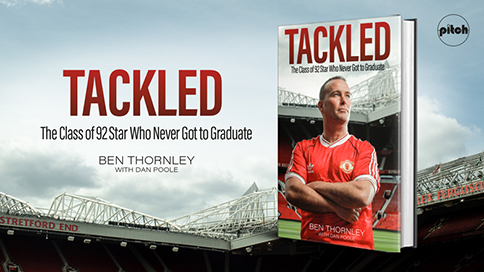 David Beckham was quick to show his support for former team-mate Ben Thornley's story via Instagram.

With the publication date of Thornley's Tackled still a month away – it's officially released on 8 October – Beckham last weekend posted about the book on his Instagram page.

The former Manchester United and England icon's Instagram account has a cool 50.9 million followers, so the book is definitely off to a flying start!

Who was the standout player when the Class of 92 won the FA Youth Cup? David Beckham? Paul Scholes? Ryan Giggs?

Think again. This is the compelling autobiography of a teenager who had the world at his feet only for one tackle to shatter his knee – and his dreams of playing for Manchester United.

A supremely gifted winger, he played in every round of the famous 1991/92 Youth Cup run and finished as top scorer in the process. It wasn’t long before Sir Alex Ferguson, keen to unleash this prodigious talent, gave him his first-team debut – but just six weeks later came the moment that would change the path of Ben’s career, and life, forever.

Ben tells his dramatic and inspiring story with the addition of exclusive insights from those who witnessed him in action first-hand. They include family, friends and school teachers, as well as Beckham, Giggs, Scholes, the Nevilles and many more.