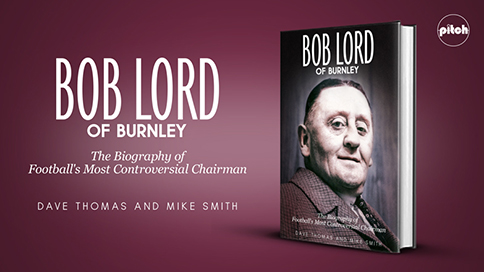 Opening on 5 October 2019, the first ever exhibition devoted to the late Burnley FC chairman Bob Lord details his contribution to club and community.

Situated in one of the upper galleries at the hall, 'Bob Lord: Burnley Born and Bred' makes innovative use of life-size cut-out figures, huge scanned pictures sourced from Burnley Civic Trust and vintage memorabilia. The official opening will be attended by directors, players and the Mayoress of Burnley.

Copies of Dave Thomas & Mike Smith's new biography, Bob Lord of Burnley: The Biography of Football's Most Controversial Chairman, will be on sale through the duration of the exhibition.

The biography of controversial Burnley chairman Bob Lord, the self-made butcher who ruled the club from 1955 to 1981. A blunt, opinionated leader, football's own 'Khrushchev' upset many with his views; but he was one of the first to run a club on businesslike lines, and oversaw a production line of top players then sold on to sustain his vision.

From barrow boy to chairman of his beloved local club, the self-styled 'Lord of Burnley' built three fine teams during his tenure. He routinely banned reporters, and alienated fans and football's hierarchy alike. He was scornful of the latter, couldn't abide 'the Continentals' or football cheats, and constantly rebelled against entrenched, outdated views.

Lord became a member of the Football League Management Committee and foresaw many aspects of the future of the game – though eventually only death spared him the humiliation of an FA inquiry into Burnley's finances. He remains as relevant, as provocative and divisive as ever – a legendary football figure to rank alongside Busby, Shankly or Clough.

Read Bob Lord of Burnley and you will discover:

Click here for more information on Bob Lord of Burnley.