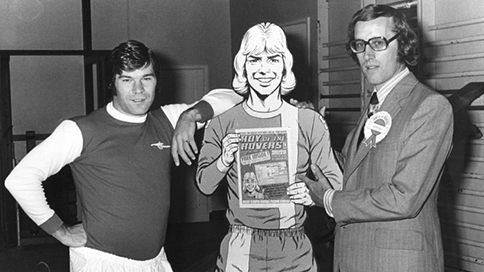 If you’re a fan of UK comics from the 60s-80s golden age, you won’t want to miss a rare appearance by legendary editor Barrie Tomlinson.

The man behind Tiger, Roy of the Rovers, New Eagle, Scream, Speed, Wildcat, Toxic Crusaders and many more classic comics will be appearing on a panel discussing football comics at Lancaster Comics Day on Sunday 11th June. But, just as importantly, he'll be chatting with fans and signing copies of Real Roy of the Rovers Stuff.

Barrie will also be discussing his forthcoming book, Comic Book Hero – due out in September and full of behind-the-scenes details about his time at IPC magazines and all-time favourite characters such as Hot-Shot Hamish and Billy Dane. Not forgetting Johnny Cougar, by Manitou!

Signed copies of Real Roy of the Rovers Stuff will be available after the event at Waterstones in Lancaster.